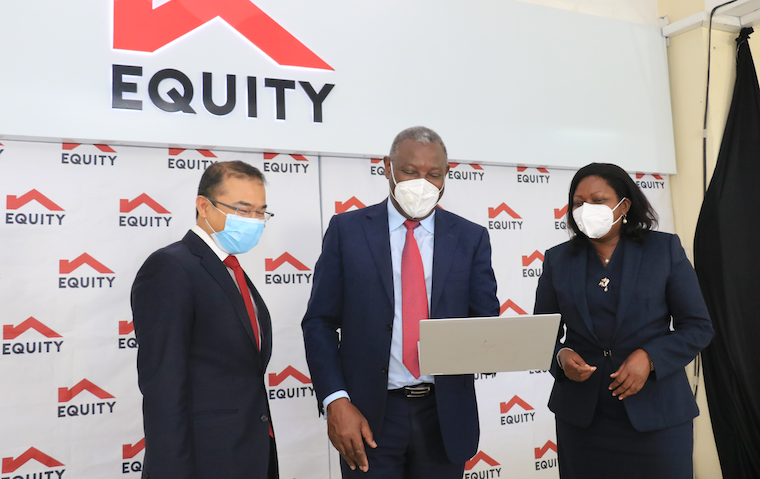 Equity Group has released its 2020 results indicating that bank’s customer deposits grew by 53 per cent while loans to customers also grew by 30 per cent even amidst the coronavirus pandemic.

Around March 2020, the coronavirus brought the world to a standstill, with global interruptions of production, distribution, and a reduction of economic activities leading to a global economic crisis but despite all this, Equity Group’s profits before provisions grew by 30 per cent.

The Group weathered the COVID-19 disruption to register a 51 per cent growth in its balance sheet with total assets growing to Ksh 1.15 trillion (about Shs 38 trillion) up from Kshs 674 billion the previous year. The growth delivered through both organic and merger & acquisition strategies saw the group become the first financial institution to cross the Kshs trillion rubicon in East and Central Africa.

Equity Group managing director and CEO Dr. James Mwangi said, “The previous global pandemic was the Spanish Flu which occurred in 1919, a century back, and hence the world had lost its memory and had to re-learn, adapt and adjust making 2020 an exceedingly difficult and challenging year. Our corporate purpose of ’Transforming lives, giving dignity and expanding opportunities for wealth creation’ became the guiding compass of the organization’s essence on how to navigate through the crisis and the challenging environment. Our results and performance became a human story of resilience and determination to live an ethical human purpose.”

According to Mwangi, from the onset, Equity Group management opted to safeguard and cushion the lives of staff, clients, and host communities by supporting lives and livelihoods through maintaining economic activities to keep the lights of the economies on and boosting government efforts with Kshs 4 billion initiatives.

The bank also offering opportunities for loan accommodation up to 45 per cent of the loan book, to minimize disruption and allow re-adjustment to match new cash flows while waiving rescheduling fees of Kshs 1.2 billion.

Further, the bank maintained and enhanced lending activities resulting in a 30 per cent growth in loan book thus supporting economic activities that provided for livelihoods and keeping the lights of the economy on, while offering oxygen to new green shoots of opportunities through retooling, repurposing, reforming and adapting to new opportunities in the marketplace, capital re-allocation and new consumption patterns.

The Group uniquely differentiated itself by prioritizing purpose first, and disproportionately focusing on the social mission of the organization of ’changing lives and giving dignity while supporting opportunities for wealth creation’.

In steering its economic engine, the management and the Board adopted a twin strategy of being defensive while at the same time being offensive to adjust, adapt and take advantage of emerging opportunities by:

In order to avoid massive disruptions, the bank restructured Kshs 171 billion worth of loans for customers whose repayment capacity was adversely impacted by Covid-19 – which represents 32 per cent of the entire gross loan book of Kshs 530 billion.

According to the bank, as at 31st December, Kshs 40 billion of the restructured loans had resumed repayments and normalized. However, yields on loans declined from 12.6 per cent to 12.4 per cent due to increased suspended interest on increased NPL book and change of loan book mix of local currency to US$ currency to 57%:43 per cent from 64%:36 per cent ratio in favour of the local currency as a result of acquisition and merger of BCDC in DRC and increase of 186 per cent on cash and cash equivalent. The profit after tax contribution from the business outside Kenya grew to 28 per cent from 18 per cent.

The Group continued to transform itself into a low-cost operating business model, by enabling self-service capabilities for customers and transforming the banking experience from banking halls to their devices.

Only 3 per cent of transactions happened on fixed cost brick and mortar branch and ATM infrastructure. 97 per cent of the loan transactions are conducted on the mobile channel delivering unparalleled convenience to borrowers, round the clock banking that compresses geography and time to allow whatever time, wherever location banking experience.

To mark its 35 years anniversary since the commencement of business, the Group planted 3.12 million trees and distributed 243,903 clean energy products.

The Group Board of Directors has not recommended a dividend for the year ended 31st December 2020, opting to prudently devote internally generated funds to the Group’s successful offensive and defensive strategy that has seen the balance sheet expand by 51 per cent with deposits growth of 53 per cent and loan growth of 30 per cent being capital weighted items and the enlarged operations of a balance sheet more than a trillion Kenya shillings requiring capital risk weighting.