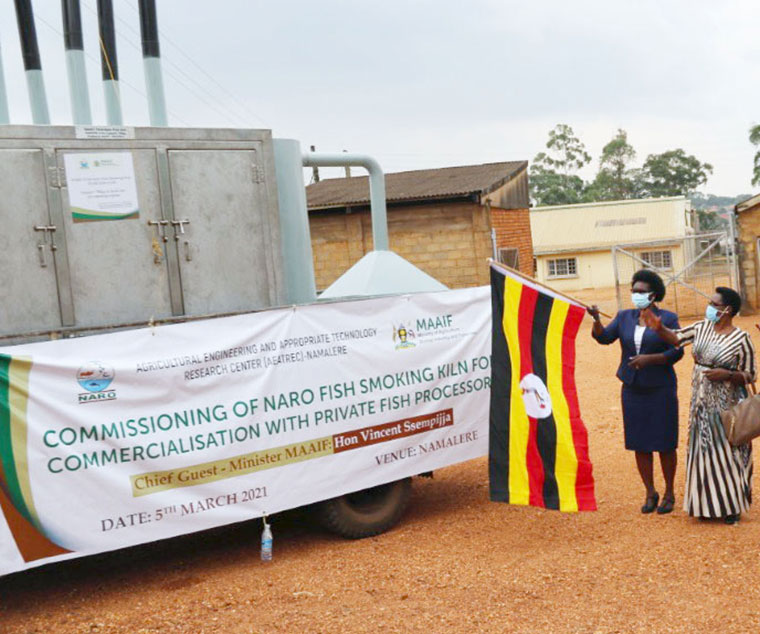 Fish processors in Uganda could soon resume export of safe smoked fish to foreign markets, months after the trade was put to a halt.

This comes after the National Agricultural Research Organisation (NARO), through its engineering arm, recently launched a batch of fish-smoking kilns to be distributed to selected farmers countrywide.

The fish smoking kilns that were manufactured by the Agricultural Engineering and Appropriate Technology Research Centre (AEATREC) will, according to NARO, increase the chances of Ugandan smoked fish being accepted by the European Union and other health-conscious markets.

According to a brief by NARO, Ugandan smoked fish previously contained 40,000 parts per billion carcinogens of polycyclic aromatic hydrocarbons, which was way above the maximum 12 parts per billion that the EU Commission regulation recommends as safe for consumption.

Hellen Adoa, the state minister for Fisheries, called for mass sensitization of the benefits of smoking the fish with kilns.

“A lot of good work is being done by NARO but many people don’t seem to know about it. It would be great if farmers were advised on the health benefits of using the kiln to smoke fish but also how using the kiln opens up opportunities for export.”

Alphonse Candia, a fish agronomist at AEATREC, says the kilns are currently pricey and might not be affordable to individuals. However, he said, the kilns could be the break that fish processors need to diversify their range of products by venturing into smoked fish. “Currently our kilns are a bit expensive. The NAROFIK-3-D4 which can smoke 500kg of fish per interval costs Shs 50 million while the NAROFIK-3-D6 that smokes 700kg costs Shs 70 million,” he said.

Until recently, local fish processors were entirely dependent on traditional methods to smoke fish. However, groups like the Kiyindi Women’s Fish Processors Association have managed to reap benefits from acquiring a smoking kiln.

“Our fish is slowly becoming more popular than the traditionally-smoked fish since ours can be stored for longer periods without going bad. The only challenge we are currently facing is that we do not have the right connections for us to start exporting our fish to the foreign market,” Pecos Logoso, the head of the women’s association, said while speaking to The Observer.