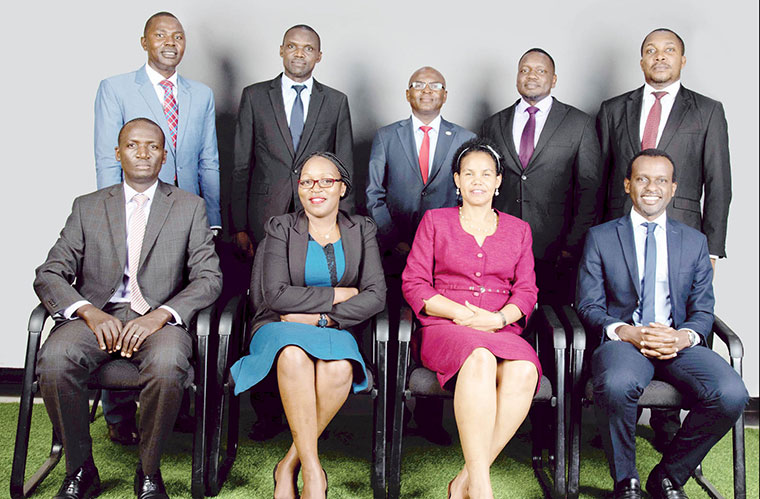 The Deposit Protection Fund of Uganda (DPF) is in celebratory mood after releasing its highly favourable annual financial report for year ending June 30, 2020. This was in spite of the Covid-19 disruptions to economic activity in the third quarter, writes JOHN MUSINGUZI.

The 98-page report was officially released and uploaded on the website on February 23, 2021. It is a comprehensive expose on the three-year-old autonomous agency’s mandate, structure, financial performance over the reporting period and the general performance trend of the financial sector since 2016.

Introducing the report, Julia Claire Olima Oyet, the chief executive officer, said they remained steadfast and resilient in the midst of the Covid-19 shock, by aiming at achieving the targets in their annual work plan and their five-year strategy.

Having started operations in 2017, the Fund weathered on despite basic challenges associated with setting up a new institution. Hence Oyet’s appreciation of the support by Bank of Uganda, World Bank, Ministry of Finance, Planning and Economic Development, and the  International Association of Deposit Insurers (IADI).

He attributed this to the increase in the number of new bank accounts coupled with a slowdown in deposit withdrawals during the last quarter of the financial year, due to Covid-19 restrictions. The number of deposit accounts in the sector also increased by 20.3 per cent from 14 million to 16.7 million over the same period.

The report says a study of a five-year period shows that deposits in the sector have consistently grown. Total deposits in June 2016 were Shs 15.8 trillion compared to Shs 27.2 trillion in June 2020.

In addition, the number of deposit accounts in the formal financial sector has grown substantially from six million in June 2016 to about 16.7 million in June 2020. This growth is attributed to an increase in literacy levels, economic activity and concerted efforts to promote financial inclusion.

Kagoro assured that 98 per cent of all accounts had Shs 10 million and below; thus they are safely protected because the current deposit protection limit is Shs 10 million.

The mission of DPF is ‘to foster public confidence in the financial system through protection of depositors of contributing institutions’. Board chairman Ben Patrick Kagoro said in line with their core objective of preserving capital and maintaining adequate liquidity levels, 98 per cent of the fund’s assets are held in Government of Uganda treasury bills and treasury bonds.

The Fund is statutorily obliged to regularly package and disseminate relevant information to the public, regarding its existence and assurances in respect of their deposits and savings in financial institutions in Uganda.

DPF exists to ensure there is public confidence in the financial system, thereby contributing towards the country’s financial stability. So, it acts as a safety net player, in conjunction with the Central Bank and the Ministry of Finance, Planning and Economic Development.

Once the public trusts the existing financial system, it becomes easier for the financial institutions to attract more savings and accumulate funds to advance their enterprise.

Also, the DPF shares knowledge and expertise with other deposit protection bodies in other countries and the International Association of Deposit Insurers (IADI) where it is a member.

An exceptional commitment to transparent governance stands out in this report. Not only does the report show financial and other targets and achievements; it also devotes space to highlighting the functions and duties of the board, the Board of Directors’ Charter and Code of Conduct, individual board member’s attendance of meetings, retainer and sitting allowance of board members, board committees and their functions, and profiles and photos of board members and of the staff.

The report also devotes a whole chapter to capacity development programs attended by the Board and staff throughout the reporting year. It highlights the meetings, conferences, technical assistance workshops, professional development programmes, and study visits attended.

Although Covid-19 disrupted the process of recruiting 29 new staff, the process has now resumed. With an enlarged workforce, DPF will be able to take full charge of all its operations, including the management of its investment portfolio internally. The Fund will also establish a retirement benefits scheme for staff.

Secondly, Oyet disclosed, DPF has embarked on the process of installing its own core IT infrastructure, which once concluded, will lead to less reliance on the Bank of Uganda IT systems, which have supported the Fund in its formative years. The Fund is also redesigning its website to provide a more engaging interaction to and with the public.

Following on the heels of an MOU between DPF and the Bank of Uganda,  the duo are soon to enter into a short-term funding arrangement which will ensure that DPF accesses liquidity fast to pay depositors, without destabilizing the financial markets through ‘fire sales’ of government securities.

The Fund is also drafting a Principles Paper that would lead to a standalone DPF law that would have provisions like eligible instruments for investment, tax exemption for DPF profits/income and a mandate to inspect depositors’ records.

In pursuit of its core objective of public awareness, DPF pledges to continue financing and engaging in extensive public awareness campaigns. It also plans to carry out a baseline communications survey to inform the adjustments which may have to be made to the Fund’s current public awareness strategy.

⚬Negotiated and signed an MOU with Kenya Deposit Insurance Corporation; it caters for information sharing and knowledge transfer between the two institutions.

⚬Board approved various IT and Human Resource-related policies, and a brand manual for the Fund.

⚬Implemented a number of IT systems.

⚬Organized a Technical Workshop facilitated by speakers from the World Bank on the proposed expanded mandate of the DPF.

⚬Board approved the Principles Paper to support the drafting of the DPF Bill.

⚬Successfully hosted the first-ever (four-day) IADI Conference to be held in Uganda; participants from over 15 African countries attended.

⚬Develop and improve a system for payments of insured deposits.

⚬Improve board and staff knowledge and skills.