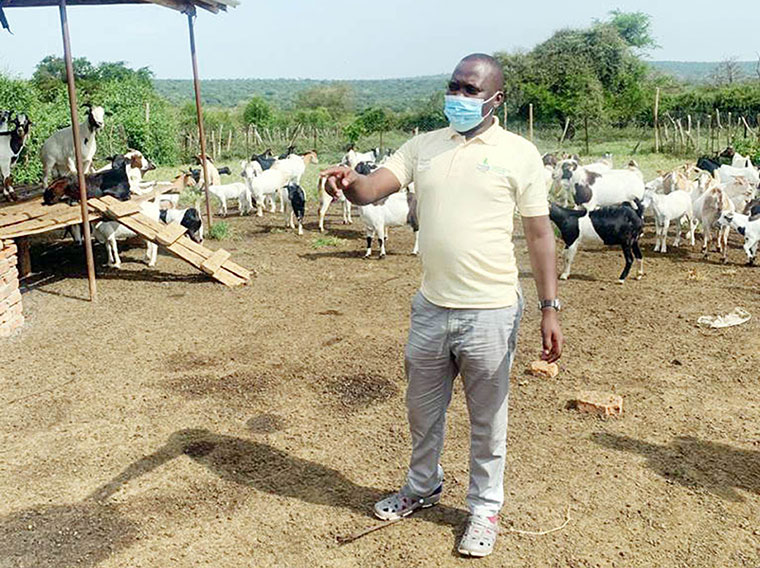 Dennis Kabiito at his farm in Rakai. He mentors youth in agriculture

Soft-spoken Denis Kabiito comes off as self-confident when he addresses issues about agriculture yet when it comes to action, he is so result-oriented he leads by example.

The 35-year-old is owner of more than 10 hectares of farmland in Rakai as well as the CEO of Young Farmers Federation of Uganda (UNYFA), whose mandate is to promote youths’ involvement in agriculture.

As Derrick Kiyonga found out during a tour of his model farm, Kabiito’s trendsetting initiatives are drawing thousands of youths to agriculture.

By virtue of heading a busy secretariat in upscale Kampala, one would normally expect Kabiito to be a sit-in boss who waits for applications but he is far from that. In fact, Kabiito is so active he spends most of his time in the field, mentoring and sensitizing young farmers about the opportunities in agriculture.

It is now five years since he spearheaded the creation of UNYFA. Looking back, he says he has touched thousands of youths and influenced millions of Ugandans in the agricultural sector.

“The idea started way back in 2013 with a colleague from the German Farmers Association (DBV). With the ambition of growing the dream to uplift farming among the young people in Uganda, who are the majority, we attended a meeting in Stellenbosch, South Africa, with the National Farmers Federation president by then, Charles Ogang. During this meeting, we resolved to set up a formidable institution that would help young farmers nationally,” he says.

“In 2015, through Uganda National Farmers Federation (UNFFE), we officially started operations. With strong partnership with the German Farmers Association, we started setting up structures across the country and organizing young farmers in the various rural areas of Uganda. By July 2017, we had fully registered the organization as Young Farmers Federation of Uganda (UNYFA). We set up structures at national, regional and district levels.”

It is amazing how Kabiito and company managed to build the organisation from scratch but he bases this narrative on the country’s demographics.

“Firstly, we based our foundation on the fact that Uganda’s population is dominated by young people, many of who are interested or can be interested in agriculture. Upon this background, we interested many young people in farming through groups and networks,” he says.

“From inception, we took a decision to work with District Young Farmers’ Associations, Youth Agribusiness Initiatives agro-based organizations and school agriculture clubs, but not individuals. This has always helped us galvanize our activities and be effective.”

From the beginning, Kabiito wanted to holistically transform youth in agriculture, and bring young people to the high table of the sector.

“We also wanted to bring out the voice of young farmers through advocacy programs. The other objective was to formulate strong synergies and relationships to help our members benefit more from UNYFA. Most importantly, we wanted to enhance creativity and innovation in agriculture,” he says.

“To achieve this, we came up with five thematic areas which include the professionalization of young farmers and institutional structure building; Advocacy, which involved bringing out the voices of youth in agriculture; Education and training for capacity building; Networks and synergies to help our members benefit more; and Services like extension programs, exposure and funding.”

On that background, however, it seems a grey area on how one would qualify to be a member of UNYFA. To this, Kabiito reasons that a farmers group has to pay a onetime membership fee of Shs 50,000. “We also collect a subscription fee of Shs 100,000 annually. UNYFA mainly targets youth in rural areas but also those in urban and peri-urban areas who are interested in agriculture,” he says.

In fact, over the last five years, UNYFA has worked with more than 65 youth associations with individual memberships totalling up to 32,000 young farmers.

Kabiito credits this success to the strong partnerships with various entities like Uganda National Farmers Federation.

“This has helped us achieve our set objectives and serve our farmers better. Our partnership with Andreas Hennes Akademie of the Germany Farmers Association has greatly helped us execute many of our projects over the years,” he says.

Talking about projects, Kabiito says UNYFA has created strong partnerships that have helped a number of activities.

“To begin with, we partnered Food and Agriculture Organization (FAO) Uganda office who helped us kick-start the Youth Inspiring Youth in Agriculture program. This program will help mentor other young farmers. Through other partners like Agriterra, we have been able to run various advocacy programs pertaining to issues in agriculture with key interest in the youth,” he says.

“The other important programme is the phenomenon of farm succession. This is something we birthed in 2019 with the idea that it is important to have a succession plan for well-established farms, especially through family members. We launched this programme last year with the presence of the ministry of Agriculture, Animal Industry and Fisheries.”

To benefit young farmers even more, Kabiito and company created the International Exchange Programme to enable farmers learn global food systems. The first cohort of farmers was taken in 2019 to Germany for three months and similarly, a group from Germany visited Ugandan farms.

However, UNYFA did not conduct the programme last year due to Covid-19 restrictions but efforts are underway this year to take 12 Ugandan farmers to Germany for three months.

Looking ahead, Kabiito hopes UNYFA can set up a home where members will be able to have an ecosystem of agriculture.

“We want to reach all famers across the country,” he says. “We also started coaching services for farmers across Uganda two years ago. Through the coaching for farmers’ service, we are inspiring them to maximise their personal and professional potential,” he says.

“We stay non-political and impartial in our activities and would like to strengthen the International Exchange Program so that it can yield more successful farmers.”

According to Kabiito, UNYFA plans to launch the Farmers Organization Video library, which will be the hub of video content for farmers in Uganda.

At the moment, Kabiito says UNYFA is calling for applications for the international young farmers exchange program with the Schorlermer Foundation of the German Farmers’ Association (DBV).

“This apprenticeship is for all young farmers in Uganda who would want to have hands-on practical experience, exposure and understanding of global farms and food systems, especially in Germany,” he says.

“Ten practical young farmers or agriculture scholars will be selected to participate in this program and 10 young German farmers will also come and be hosted on the Ugandan farms to be exposed to Uganda culture and tropical agriculture.”

Meanwhile, Kabiito says it is important to talk about rural employment and development of the youth in the agricultural sector, because the rural areas take most of our Ugandan young people.

“We have to shift to profitable large-scale farming, and once the young people see that the farm is profitable, they will be drawn to the agriculture sector since it gives meaningful employment and income,” he says.

Kabiito further suggests there is need to explore the interests of the youth through organizing them. This, he reasons, gives them the voice to speak out about their interests and sets the scale in terms of harnessing all their potentials together.

“There has been a mismatch in our education curriculum between what the education is providing and what the market requires,” he says. “So, we need to look at skills enhancement in terms of making it more vocational, especially in the agricultural or agri-business sector. Mentoring is needed for the youth in terms of skill enhancement, learning from peer to peer is important in skilling, and finally incubation as that step which brings in the aspect of entrepreneurship.”

Lastly, Kabiito says there needs to be policy and will.

“How are our national-rural transformation plans looking into the aspects of finance, succession plans, infrastructure and services in the rural areas as the key things that will keep the youth in rural areas,” he says.

“If these are provided for, the urbanization rate will sorely increase, with many of the areas turning into urban or peri-urban areas that the youth crave for.”

At just 35 years, Kabiito is a biologist, a farmer, a fisheries scientist and an aquaculturist. He has 10 years of experience in rural extension services, development work and advocacy, training and lobbying. He is experienced in program development and management, monitoring and evaluation.

He is also a public health specialist, holding a master’s degree in that field. He has worked with farming households as an extension officer, a farmer association facilitator. He has also supported the process of establishing several associations and primary co-operatives in the central region of Uganda.