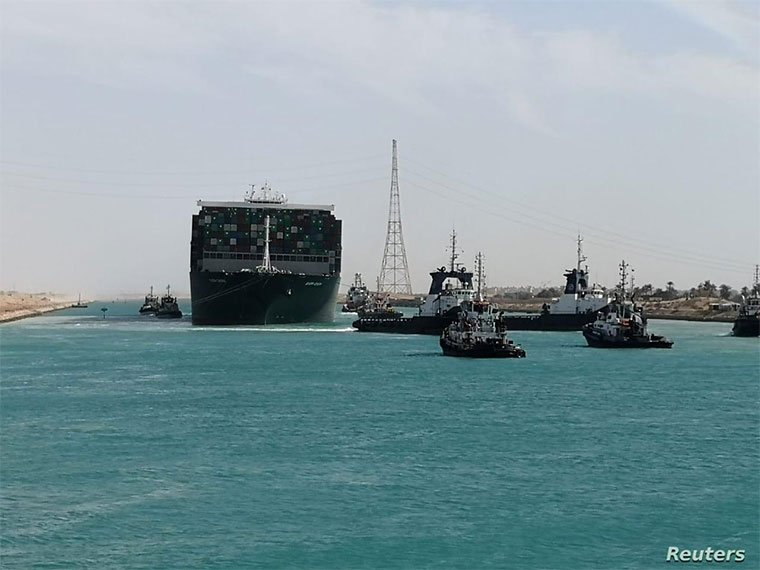 Ship Ever Given, one of the world's largest container ships, is seen after it was fully floated in Suez Canal, Egypt, March 29

Officials with the Suez Canal Authority (SCA) said Monday the massive container ship that had been blocking the canal has been freed and is making its way down the waterway.

Video from the scene shows the 400-meter ship, the Ever Given, moving down the canal, with tugboats on its side and at its stern. Numerous ship horns could be heard blowing, signaling the end of the crisis.

The ship became jammed diagonally across a southern section of the canal in high winds on March 23, halting shipping traffic on the shortest shipping route between Europe and Asia.

Earlier Monday, when it was unclear when the canal would officially reopen, Egyptian President Abdel Fattah al-Sisi from his official Twitter account wasted no time declaring the crisis over.

“By restoring matters to their normal course, with Egyptian hands, the whole world will be assured of the path of its goods and needs that are passed by this axial navigational artery,” he tweeted.

The canal reopens after nearly a week of blocked traffic at the key shipping route connecting the Red Sea to the Mediterranean Sea. More than 360 ships were waiting to enter the canal as of late Sunday.

Egypt was eager to resume traffic along the Suez Canal, which brings in between $5 billion and $6 billion in revenue each year. According to a study by German insurer Allianz, each day of the blockage in the canal could cost global trade between $6 billion and $10 billion.

Some maritime firms responded to the delays by deciding to divert ships around the Cape of Good Hope, at the southern tip of the African continent. After further dredging and excavation over the weekend, efforts by rescue workers from the SCA and a team from Dutch firm Smit Salvage worked to free the ship using tug boats in the early hours of Monday, two marine and shipping sources said.