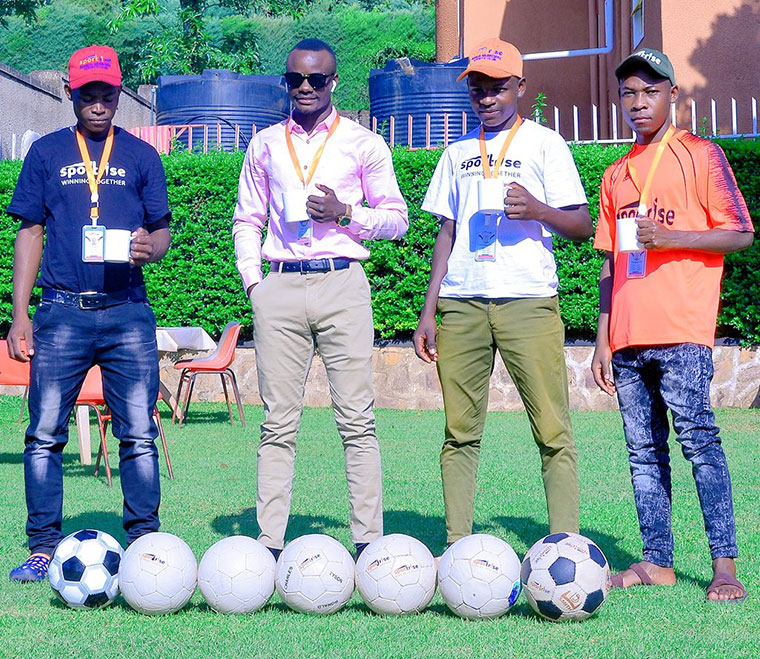 In the early part of the year 2020, MTN Uganda launched a campaign called 'MTN For Good' with the intention of awakening youth to the fact that they can achieve their dreams if they pursue them.

The youths were required to submit a one minute video in which they talk about their enterprise and where they would like to take it. Douglas Smith, the youthful CEO of Sportrise polled the highest public votes beating over 100 other participants to emerge winner in the inaugural MTN For Good campaign.

As a way of drawing Smith closer to the realization of his dream, MTN Uganda has enrolled Smith to the MTN Foundation Youth Empowerment program. Smith alongside his four colleagues will be the inaugural participants of the six-month-long training which will enable them manage their businesses better as well as enable them to use the power of Information Technology to provide solutions to their communities’ most pressing needs through their businesses.

Sportrise is a local company that uses plastic waste to make affordable and durable soccer balls to support the engagement in sports as a way of influencing social change among children and youth. Details about his heart-melting initiative can be found at: https://sportrise.co.ug/

A sportsman at heart, Smith runs a non-governmental organization that he founded with the sole purpose of championing social change for disadvantaged children through sports such as soccer that provide a platform for children to spend time engaging in healthy habits.

Following the scarcity of soccer equipment, Smith embarked on a research which, as expected, revealed that most of the soccer balls used in Uganda are imported and are as such expensive, making them scarce yet most important equipment for soccer.

According to Smith, given that most soccer pitches are rough bare ground without turf, the usually imported soccer balls easily wear out due to the rough conditions of the pitch yet they are also very costly.

This challenge inspired Smith to introduce a new commercial venture in which he uses plastic waste to make balls by melting it to make affordable yet long-lasting balls that can withstand the nature of Uganda’s soccer pitches.

“In addition to being expensive, these balls were easily worn out because of our rough playgrounds. So we needed to make balls specifically meant for our rough playgrounds,” Smith says. “So that is how I decided to embark on this research of how to make these balls locally so that they are not only affordable but also durable and matched to our conditions.”

Currently, Smith’s balls are sought after by both football clubs and institutions such as schools among other people.

“There is more demand than the balls we can supply,” Smith says, noting that despite the low level of production due to the financial challenges that are hampering his expansion, customers continue to place orders for the balls.

As a winner of the MTN For Good campaign, Smith will receive support from MTN including MTN mobile money to seed into his business venture, 60GB data per month for six months and Kigale fixed lines among others. MTN will also offer him an entrepreneurship and mentorship program that will help him manage his organisation better.

Speaking at the launch of the campaign in February, MTN Uganda chief marketing officer Sen Somdev said, “We all have dreams. It’s a great thing to be a dreamer because the ones who dream are the ones who own the future. Like MTN, many of the leading businesses, companies and enterprises started from an idea that sprung from a dream. Youths have many dreams and MTN wants to help them bring their dreams to life under the ‘MTN For Good’ campaign.

For all the youth out there, Smith says that; “We are all dreamers but those dreams don’t materialize without effort. When you begin, you are halfway done. I believe we can change this country if we all dream big because, the future belongs to those who dream.”

One looks around in the city of Kampala for any proper standard ground and there is none. As said, most fans of all games have got used to play their games on rough, bare grounds.

The KCCA seem to have lost interest in all these facilities. Fortunately where these young men are standing is on artificial green turf which seems to be winning the high cost of maintaining an organic planted grass on the play grounds.

Uganda as a tropical country in the old years of colonialism was able to manage such beautiful organic playgrounds. One reckons the ball and the playground go together.

The artificial grass, the organic grass and the ball should all come together to mobilize the youth to play football and other games. The kids can be taught how to grow the organic grass(lawn) a paspalum setaceum grass species.
Report to administrator
0 #2 Rusa 2021-03-09 06:04
Hi that's brilliant, where are the balls sold and what's the pr4YXGSice please?
Report to administrator