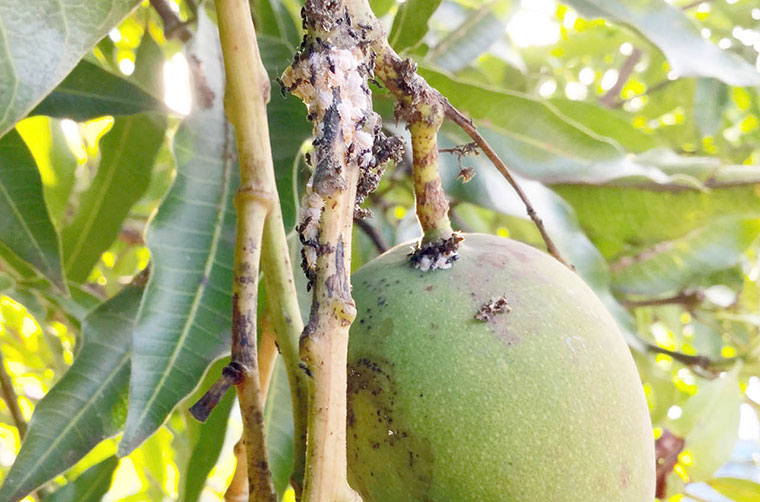 Due to the increased threat of the destructive mealybug pest that mostly attacks mangoes, the Food and Agriculture Organisation (FAO) has instituted a technical operation project to do preliminary findings on Uganda’s preparedness to contain it, writes ERNEST JJINGO.

When the mango mealybug pest attacks a tree, it leaves a destructive effect on the branches, sap and fruits. Such is its destructiveness that it has caused huge losses to farmers wherever it has attacked.

Worse still, the pest is difficult to stop with pesticides. In Africa, it first invaded West Africa, where it devastated citrus and mango production and last year, it was reported in Rwanda.

So, to avert the looming danger to Uganda’s agricultural sector, the ministry of Agriculture, Animal Industry and Fisheries (MAAIF) conducted trainings for a surveillance team to monitor any traces of the mealybug in the country in December.

The training, which was done in partnership with the Food and Agriculture Organization (FAO), focused on close observation of the situation. However, due to the increased threat of the pest, FAO has instituted a technical operation project through MAAIF to do preliminary findings.

According to Dickens Murungi, a Senior Agricultural Inspector, the project includes a detection survey that will be conducted by staff from the National Agricultural Research Organization (NARO) as well as the Directorate of Crop Protection (DCP).

“We believe that because Ugandan traders do business in Rwanda, there is a threat for the pest to come into the country along with planting materials,” he says.

“Teams of inspectors and research officers have been dispatched, tasked to collect a number of mealybug samples, bring them to NARO, analyze them and thereafter come up with a final declaration on whether or not the pest has been imported here.”

Murungi adds that the team has already prepared chemicals to be used in a detection survey and this is going to take 12 days before the team embarks on monitoring surveys. “If we find that indeed we do not have it, we intend to strengthen border inspection. If we find it present, we have to find a containment method to prevent it from further spreading,” he says.

“If we find it in a particular area in the country, we shall carry eradication programs to see how to eliminate it. However, if it has spread countrywide, then we will have our work cut out but FAO is willing to support in terms of using a biological control agent since mealybugs are hard to control with pesticides as chemicals rarely work on these pests.”

In the worst case scenario, Murungi admits, there is a biological control agent that was successfully used in West Africa to eradicate it and the ministry may borrow and replicate it in Uganda. For now, though, Murungi assures Ugandan farmers that there is no need to panic as the pest has not been detected in the country.