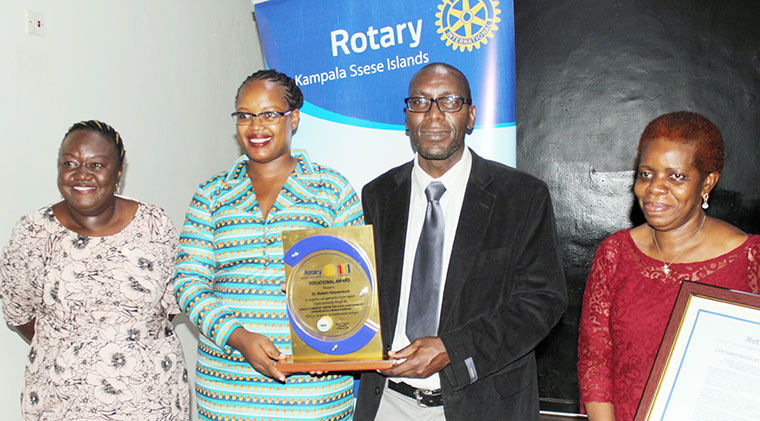 On February 4, the Rotary Club of Kampala Ssese Islands presented Dr ROBERT KALYESUBULA with a vocation award in recognition for his outstanding work in improving the healthcare and education of vulnerable communities in Nakaseke through his African Community Centre for Social Sustainability (ACCESS), writes John Vianney Nsimbe.

When you talk to Dr Robert Kalyesubula, a medical practitioner, one major character trait stands out; the meekness and a non-presumptuous warmth towards people.

In 2003, Kalyesubula started the African Community Centre for Social Sustainability (ACCESS), a non-governmental organization, to help the deprived communities in Nakaseke district, his birthplace.

The area had been heavily ravaged by the HIV/Aids scourge dating back from the late 1980s and early 1990s, creating so many orphans and widows. But also, the fact that Nakaseke is in the Luweero Triangle, meant that the insecurity between 1981 and 1986 also had its collateral damage.

It is on the background of those effects that Kalyesubula felt motivated to lend a hand to improve people’s lives. It is a task he has led for the last 18 years, and the Rotary Club of Kampala Ssese Islands felt captivated to support him going forward. On February 4, the club bestowed upon him the special vocation award as a recognition to his services to the community.

Helen Kaweesa, a member of this Rotary Club, told The Observer that beyond the award of recognition, they intend to create a partnership with ACCESS.

“As Rotary Club, we are composed of 100 members, and we feel a need to supplement the efforts of Dr Kalyesubula, because we were touched by his vocation to help so many underprivileged people,” she said.

The club has always engaged in human-interest activities to improve lives and through their international contacts, Kaweesa said, they will endeavour that Kalyesubula gets support so that more disadvantaged people can benefit from the opportunities ACCESS is extending.

Presently, ACCESS is educating 150 learners in nursery school. In addition, there are 500 learners in both primary and secondary school that ACCESS is supporting and it intends to see through until university level. ACCESS also runs a skills-building programme where 150 girls are trained in hair-styling and tailoring.

Since 2015, ACCESS has graduated 156 nurses under the certification of the ministry of Health. In fact, 206 students are currently at the ACCESS School of Nursing and Midwifery. But more importantly, there is the ACCESS Life Care Centre in Nakaseke, where the graduates from the nursing and midwifery school are accommodated as employees.

Apart from offering training of the locals in Nakaseke in different sector fields and extending healthcare services, ACCESS also engages in facilitating income-generation activity training. ACCESS has got to a point where it has had to address the various needs that people have, which keep changing with the passing of time.

Kalyesubula explained: “In the initial stages of ACCESS, the major outcry was about training people, and enabling them get skills. But people who have been trained come back to you asking for jobs. So, what we have done, is help secure interest-free loans, train people in goat, chicken and crop production, so that they can get an income for sustainability.”

However, Kalyesubula did not stop at establishing ACCESS. Following a fellowship to Yale University in Connecticut, USA between 2009 and 2011, where he studied Nephrology (kidney diseases) and hypertension (blood pressure), he returned home to start the Uganda Kidney Foundation in 2012, to help generate a focused outlook on how to treat kidney complications. The foundation continues to grow in strength with 12 kidney specialists today in the country.

“When I chose to study Nephrology, following my master’s degree in Internal Medicine between 2004 and 2007, Uganda only had two kidney specialists, Dr Emman-uel Ssesanvu and the late Dr Edward Kigonya, both of whom inspired me a lot to join the field.”

While Kalyesubula is head of Physiology department at Makerere University, his practice in nephrology dates back ten years now; a period in which he has treated 28,000 patients.

In many ways, this is an incredible number especially when one considers that it is the income Kalyesubula gets from his work as a kidney specialist, and a general physician before, that has supported ACCESS from the time it started making baby steps.

Born on June 30, 1976, Kalyesubula’s father died in 1984 during a period when there was heightened insecurity in the country. But his ordeal was just beginning at the time. Soldiers stormed their village, and as they made it for the bushes to escape, Kalyesubula separated from his mother during the frantic commotion.

But a relative of his took him to Kawempe, where he stayed with his aunt. Unfortunately, Kalyesubula dropped out of school in the process. Yet, as luck would have it, Kalyesubula was introduced to a team of evangelists at the Kawempe Full Gospel Church, who had visited as preachers.

They learnt that the eight-year-old had dropped out of school. So, they took up Kalyesubula, co-opting him into an orphanage, Ambassadors of Hope in Makerere Kikoni. This orphanage was behind the famous African Children’s Choir, which Kalyesubula was now a part of.

Sooner rather than later, Kalyesubula was on the plane to the USA in 1985, going to sing. Kalyesubula’s life was now shifting from that of a lowlife orphan, to a celebrity. After spending two years in the USA, studying on tour, the Accelerated Christian Education (ACE) curriculum, Kalyesubula and company returned to Uganda in 1987. By then, Kalyesubula should have been in Primary Six.

Instead, he was taken to Primary Seven at Nakasero primary school. This, he recalls, was done, because he was quite brilliant in class. His Mathematics, Science and English were quite good. But Social Studies was the problem, because it was so Ugandan-centred, which he did not study while on tour.

So, for six months, he was subjected to extra coaching, in order to do his Primary Leaving Examinations (PLE) aged 11. Indeed he did, and he scored exactly his age at the time of sitting the papers, 11 aggregates. These results were enough to take Kalyesubula to Kyambogo College School, where he did his O-level, scoring 16 in six subjects.

He then joined Busoga College Mwiri for A-level, to do Physics, Chemistry and Biology (PCB) while stroking sub-math. He scored a BBC and a credit three in the sub-math, to join Makerere University with 16 points, where he pursued a degree in Medicine.

After graduating as one of the top 15 medicine students in his class, Kalyesubula notes that it was the kindness of people that got him on his way. It was, therefore, incumbent on him to help the people of Nakaseke, many of whom remind him of his childhood struggles, following the passing of his father, and being separated from his mother.

Yet for what it is worth, Kalyesubula was able to reunite with his mother in 1988. It was an emotional moment, considering that he had all along thought she was one of the war fatalities. It was such a happy feeling; probably the same way the thousands of children that have benefited from Kalyesubula’s efforts in ACCESS feel today.