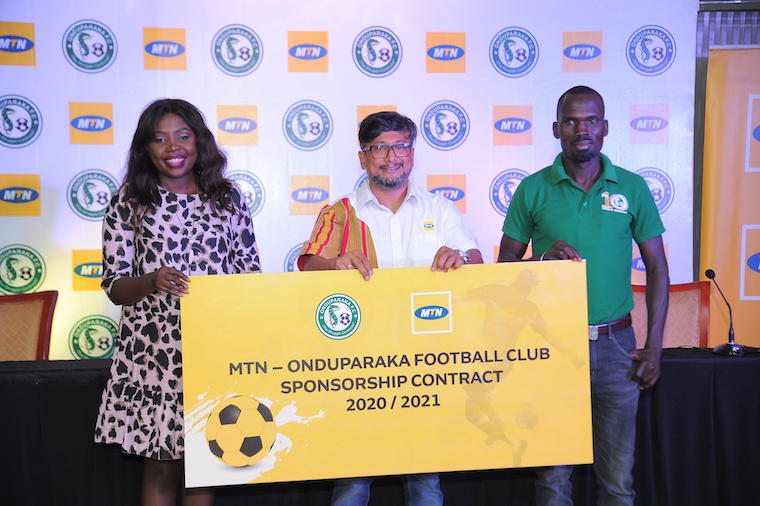 MTN Uganda has renewed its sponsorship contract with Onduparaka FC for another year. The renewed sponsorship deal from MTN also entailed the unveiling of a new jersey for the club for the 2020/21 season.

MTN has sponsored the West Nile based club since the 2017/18 season. While announcing the sponsorship renewal at a press conference held at Hotel Africana in Kampala, Somdev Sen, the MTN Uganda chief marketing officer highlighted MTN’s intentions to continue supporting local sports across the country.

“As the biggest supporter of local sport in Uganda, MTN has over the last 22 years committed to the growth and development of local football in Uganda. This continued sponsorship of the West Nile based football club that rose from the ashes of turmoil to join the top football league in Uganda is a further demonstration that indeed we are good together,” said Sen.

Onduparaka FC head coach Vialli Bainomugisha thanked MTN for its continued support over the years, noting that the team has been propelled to greater heights, partly because of the immense support from the telecom giant.

“We are happy and grateful for the support that MTN has extended towards Onduparaka FC as our official sponsor. We are also very thrilled that our dear sponsors still believe in us and that they are extending our contract. We promise to keep shining in this 2020/2021 season,” Bainomugisha said.

Onduparak is the most popular football club in West Nile. The club’s rise to one of the top-flight teams over the years has not only opened up the region to the sports world but also enhanced the rise of dozens of young boys from West Nile to football prominence in Uganda and Africa. For many fans in West Nile, Onduparaka represents that club of local football fanatics that rose against all odds to join more privileged teams in the league.

To further support the club especially now that the fans are not allowed into the pitch because of Covid 19, MTN will run “Predict and win challenges” for all Onduparaka games where fans will predict how many goals Oduparaka FC will score during the game, during the month and the entire season and stand to win several prizes such as MTN data.

In a bid to nurture soccer commentary talent, MTN, the official broadcast partner of the StarTimes Uganda Premier League (SUPL) launched a new challenge that sought to identify one local fan with a talent for soccer commentary. The lucky person will get a one-year contract to do side pitch analysis, interviews, game analysis and commentary for the SUPL season 2020/21.