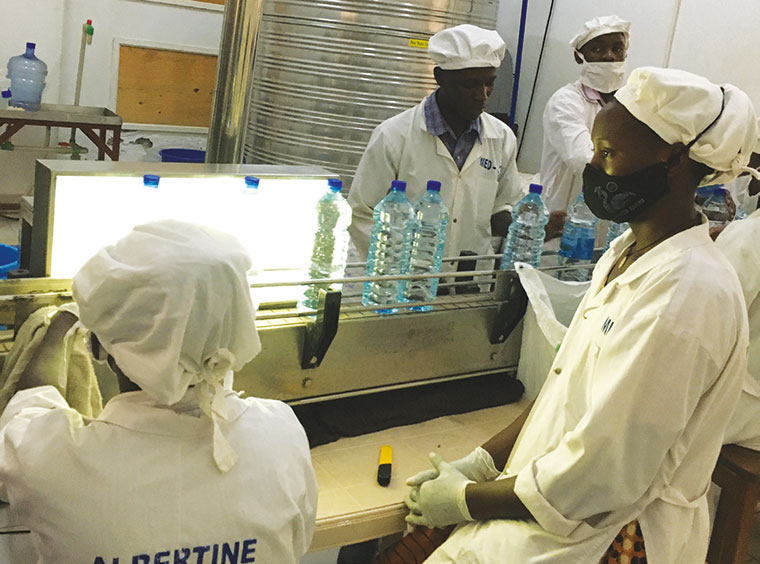 Workers in the factory of Albertine purified drinking water

“You see him; if you talk about tobacco, he can even fight you,” Dr Fred Kabagambe Kaliisa says while pointing to a former tobacco farmer who had come to his Miika Estates in Hoima district to buy seeds.

The farmer laughs back in agreement. “It is amazing what these seeds can do. You can plant 30 kilogrammes of this seed, and get 10 times more. You can [harvest] over a tonne of seeds,” Kabagambe adds.

Kabagambe, once the powerful permanent secretary in the ministry of Energy and Mineral Development, but now a presidential advisor, has big dreams for farmers in Hoima and the neighbouring areas.

“We started small but we see the big picture,” he says emphatically of his seed business, which he launched right before the Covid-19-induced national lockdown in early 2020.

Donning a bowler hat, a light brown khaki shirt, and sky blue jeans, Kabagambe walks around his Miika Estates – each stride slow but measured - with a sense of pride. The pressure and fatigue that Kabagambe faced while patrolling Uganda’s multi-billion dollar industry of the oil and gas, electricity and mining have given way to a rather calm demeanour of a man who is enjoying semi-retirement.

The tough, and sometimes, dismissive tone that accompanied a number of statements Kabagambe made while he served at the ministry have since faded, and in their place is a rather warm and welcoming voice.

If securing a nice retirement life needed a name, Fred Kabagambe Kaliisa would probably be it. Hoima district in western Uganda needs few introductions. Known to be the epicenter of Uganda’s oil discovery, Hoima carries the hopes and aspirations of many people in the country.

Nothing has excited Ugandans like the discovery of the black gold nearly 15 years ago. Once a footnote in Uganda’s economic books - well, save for its tobacco farmers - Hoima now occupies a special place in the country’s grand plans. And the people in the area know it.

The town is now dotted with a couple of supermarkets and restaurants. International hotel chain Protea once announced that it would build a hotel in the area. The hotel, like many other businesses, had an eye for the oil. Other large multinational firms like British American Tobacco Uganda, which had for long enjoyed a conducive relationship with many tobacco farmers in the district, packed their bags and left after oil was all the rage in the area.

Land prices shot through the roof. A kilo of beef in Hoima town goes for the same price as that in many uptown areas in Kampala, regardless of the 200 kilometres apart. A flush of cash was splashed around the area. All because of the oil.

However, almost 15 years after oil was discovered in Hoima and the neighbouring districts, Uganda is yet to produce its first barrel. Negotiations around tax, the need to first formulate laws, and a sluggish pace to approve transactions among the oil companies have all partly led to the delay in Uganda achieving first oil.

The long wait for oil production has had a sobering effect for many people in Hoima. Add the impact of Covid-19, which has slowed down business prospects, and you have many people in distress mode. Hope has given way to desperation. And yet, Fred Kabagambe Kaliisa remains fired up.

Take the eucalyptus trees that he planted at his Miika Estates many years ago. “There was nothing here five years ago,” he said, pointing to – by any measure – his beautiful retirement home.

“I think it was just the foundation. These trees built this house.” It is not just trees at Miika Estates. Miika Estates is a quiet treasure, with waterfalls – yes, waterfalls - hidden from the hustle and bustle that is Hoima town. The estate sits on acres and acres of land (we could not verify the size). It has streets with the names of Kabagambe Kaliisa’s family members.

“This place is a good model of what wealth creation can do to a rural area,” Kabagambe said of his Miika Estates. Miika Estates has an assortment of businesses. The Albertine Purified Water business arguably represents the group’s brand image over a wide area. The bottled water is sold in neighbouring districts, some even as far the Democratic Republic of the Congo.

Kabagambe Kaliisa has invested in machinery, but also used the small space for the water business efficiently. The process of blowing up plastic tubes into empty bottles, refilling them with water, and then sealing them, full with branded stickers, does not take more than 10 minutes. It is the attention to detail by the staff at the bottling company that is impressive though.

Work is undertaken quietly, with each worker fully aware of their duty. Mistakes are not entertained along the conveyor belt. Young girls and boys, most of them from the local communities, are employed here. At least 40 people are employed at the water business.

Like many other food and beverage industry, quality control is critical. Sumaya, a qualified food scientist who leads the team at the water company, says on top of doing other quality controls such as testing the purity of the water, they also carry out maintenance works every month.

At least 2,000 to 3,000 cartons of bottled water are produced every day. One person who has a home in Hoima says the Albertine bottled water is popular in the district.

“The water is good and the price is affordable,” he said, explaining that one litre goes for as low as Shs 1,000 in some areas.

While many people are drinking the water in the district, the seed business is one to look out for. Although the business is yet to realise its full potential, Kabagambe says they have about 120 farmers who are already buying the seeds. The company gets the hybrid seeds from the National Agricultural Research Organisation.

Asked what impact the seed business has had on the community, Kabagambe Kaliisa paused, lowered his face mask, and said: “One lady has told me that she was able to buy windows and doors to complete her house. And this is because of her growing these seeds and getting a good harvest. For five years, she had struggled to work on her house.”

A number of women have been hired to do the sorting of some seeds. A small laboratory has been set up to carry out germination tests.

“So far, we are happy with the seeds and how far we have come,” Innocent Kunihire, the manager of the seed line of business at the estate, says.

More people will be hired when the business is fully stocked with machinery. Then will its full impact be felt. Not that Kabagambe Kaliisa needs any introduction. More than 10 years ago, he was bestowed with the Mujwarakondo,
a special royal regalia given to a few outstanding individuals who have made a major contribution to the Bunyoro-Kitara kingdom.

It is one of the things he is most proud of, and he is not shy showing it off to visitors. At the age of 66, Kabagambe Kaliisa shows no sign of slowing down. His next project is to set up a picnic area around the Nyakabingo waterfalls.

The place is a treasure. Kaliisa said an Italian environmentalist described the area around the chimpanzee sanctuary and the waterfalls as a “typical tropical rainforest where trees grow in colonies.”

“My friend Amanya Mushega likes to come here to sit and just watch these waterfalls. You know there are people who believe these things are medicinal,” Kaliisa said.

Kaliisa, who is a presidential adviser, plans to turn the area into a better picnic area for tourists. He believes they would love the place.

“We had a good Christmas season. There were a number of chimpanzees that were at the waterfalls. You know everyone likes to be a good place. Even the animals,” Kaliisa said.

Like anyone who has worked in public service, there are always questions about their wealth and how they amassed it. Kaliisa has not been implicated in any illegal accumulation of wealth. He laughs when he says he is required to declare his wealth as per government policy.

“You know they send these young girls and boys [from the Inspectorate of Government] to audit my business. But I tell them not to just come and audit, but to also learn something that they can go away with.” Kaliisa warns anyone against thinking that they can achieve all that he has in a short time.

“This has taken a lot of hard work and discipline. Nothing comes free.”

+1 #1 Kalemera 2021-02-03 18:45
This is what most of us with the means should do; leave the urban mess that is Kampala and Wakiso and return to invest in our underdeveloped home towns.

For that, he should be applauded. I am also not a fan of bottled water - its not worth the price and the earth could use less plastic - but at least its priced decently; still, he's making a killing.

It's the eucalyptus I am completely opposed to; it uses large amounts of water and acidifies soils, leading to soil erosion and desertification. Those treasured waterfalls of his are bound to turn into trickles.
Quote | Report to administrator
+3 #2 Kalemera 2021-02-03 18:46
"Kaliisa has not been implicated in any illegal accumulation of wealth."

Very few people have been implicated, not until they fall out of favour or someone has a vendetta against them. We are not fools.
Quote | Report to administrator
-1 #3 Robert 2021-02-08 18:12
"You can plant 30 kilogrammes of this seed, and get 10 times more. You can [harvest] over a tonne of seeds" - what seed farming or business is this?
Quote | Report to administrator
Refresh comments list
RSS feed for comments to this post
Add comment