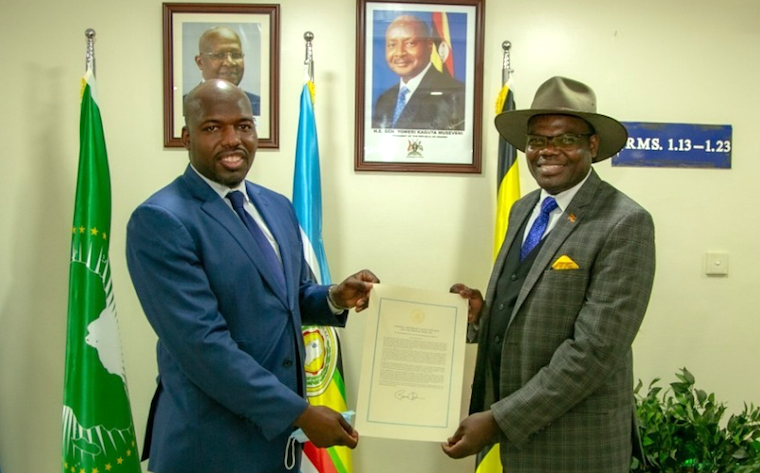 David Anderson handing a certificate of recognition to Ogwang

Global economist David Anderson is set to invest over Shs 72bn in agro-processing and value addition to agricultural products in Uganda.

Anderson, also former presidential personnel to former US President Barack Obama is in the country for a business tour and has said skills training is the way to go if you Uganda is to get rid of unemployment among youths.

Anderson was invited by Isaac Kigozi, the managing director, East African Partners (EAP) - a company that markets the region as an investment destination.

The investment follows a decision that has since been taken by some African Americans to withdraw their savings from financial institutions owned by whites to those owned by blacks as a form of protest against racial discrimination.

African Americans continue to face racial discrimination due to their colour which has seen many face injustice at the hands of whites authorities. Last year, Afro Americans across USA took to the streets protesting the increased racial discrimination following the gruesome murder of the late George Floyd, an African American who was killed by a caucasian police officer in May 2020.

Kigozi then launched a campaign encouraging Afro Americans to consider coming to Uganda to consider settlement as well as taking up different investments. This call has since attracted support from President Yoweri Museveni.

Anderson who arrived in the country last week, said that his coming to Uganda would secure his future as a response to the call made by President Museveni to all African Americans to return to Africa and take up investments and settlement.

“I came to Uganda to secure my future, it should be to no surprise that after the 2020 murders of Afro-American men and women in the US who are treated as second class citizens even when you rise to your full potential and create wealth,” Anderson said.

Anderson said that although Uganda is a developing country, it is a place for various opportunities to any investor across the globe given its good social, economic and political environment.

Meeting with officials at the ministry of Foreign Affairs, Anderson said that his company Anderson Royal Industries, which holds 15 companies with a net worth of $101 million, would take up investment in a number of sectors in the country.

“We have got a range of businesses dealing in software technology, real estate, commodities trading, logistics, advanced medical technology and virtual education and we would wish to establish the same in Uganda,” Anderson said.

He pledged to start with investment in the agriculture sector by engaging in agro-processing and value addition as well as real estate.

“For the start, we are looking at investing between $10m to $20m for a period of five years,” he said.

Ogwang noted that his office will coordinate the different departments and ministries to ensure that Anderson is granted all the support he needs to establish his company in the country. At the meeting, senior presidential adviser on diaspora affairs, ambassador Abbey Walusimbi welcomed Anderson on behalf of President Museveni and assured him of ensuring the success of his investment in Uganda.

A few years back, Museveni launched the Presidential Initiative on skilling the girl child and he has since boosted it by offering startup capital and training to boys who work in washing bays, welding, carpentry workshops and garages among others.

Uganda have enough of those, pounding their hearts about dreams/mission/purpose/future/allegiance and name-dropping Steve Job/Mandela/Mother Theresa as inspirations.

Ugandans are able to do all those things on their own if we were not drenched in tribalism, insecurity and corruption.

What we need here is to rejig our education system from primary level through to secondary/tertiary and higher education in order to prosper. We have the will, resources and energy to do it ourselves. SHREWD PLANNING FROM THE TOP IS WHAT WE NEED!
Quote | Report to administrator
Refresh comments list
RSS feed for comments to this post
Add comment