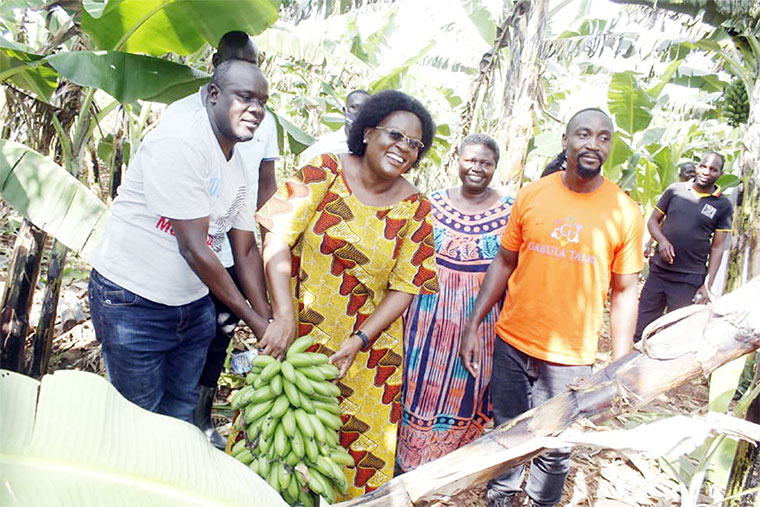 Whereas it was formally a courtesy call, the Kyabazinga seized the opportunity to showcase the kingdom’s model farming techniques and charity initiatives aimed at empowering people, writes Ernest Jjingo.

It was a coincidence that as Dorothy Kisaka, the KCCA executive director, marked 100 days in office, she travelled to Budhumbula palace in Kamuli district at the invitation of the Kyabazinga.

It was her first time at the palace in her new capacity. Kisaka, a daughter to former Luuka MP Dr Richard Bulamu, was accompanied by her family and the tour aimed at promoting development in the Busoga sub-region.

Part of the palace land is Budhumbula royal farm, an expansive area with about 150 acres. It is a mixed farm with citrus fruits, coffee, matoke and dairy farming sections. During the tour, the Kyabazinga took time to personally feed the cows, prune the pineapple garden as well harvesting some matoke for his visitors.

It was a rare occasion to be around a carefree Kyabazinga, whose humour drew awe from Kisaka and her entourage.

“I enjoy participating in the farm work and it also helps me get first-hand information and experience,” he said as he guided a cattle herd to the watering trough.

“I do this because I want to be in position to offer sound advice to visitors here who may wish to join commercial farming as a way of alleviating poverty.”

Most importantly, as the Kyabazinga explained, he is going to turn Budhumbula into a model farm for learning purposes in Busoga.

“Agriculture is the biggest economic activity in Busoga but many farmers lose out because they are not skilled in value addition. Therefore, this farm will offer them pragmatic approaches to improve yields on top of skilling them in the best practices as well as the modern techniques,” he said.

“I believe sharing this knowledge will go a long way to alleviate poverty in Busoga.”

All proceeds from the farm go towards kingdom projects, especially on education and health. At the end of the farm tour, the Kyabazinga gifted his visitors with matoke and goats.

Earlier, the Kyabazinga held a cordial meeting with Kisaka, in which he congratulated her and assured her of the kingdom support. They agreed to continue to promote development in education, health and culture among the Basoga.

“I’m grateful for the Kyabazinga’s warm welcome to join hands in developing Busoga kingdom and I will do everything possible to see the success of these initiatives,” she said.

They also agreed to empower girl-child education, through the kingdom’s ministry of Gender. Already, the kingdom is carrying out several activities to help the girl-child through the Kigangu program. There’s also the Obwakyabazinga bwa Busoga bursary program where the girl child gets bursaries to attend school.

On her part, Kisaka called upon Basoga, including those in the diaspora, to always return to their mother land and develop it, adding that the kingdom has limitless opportunities in development.