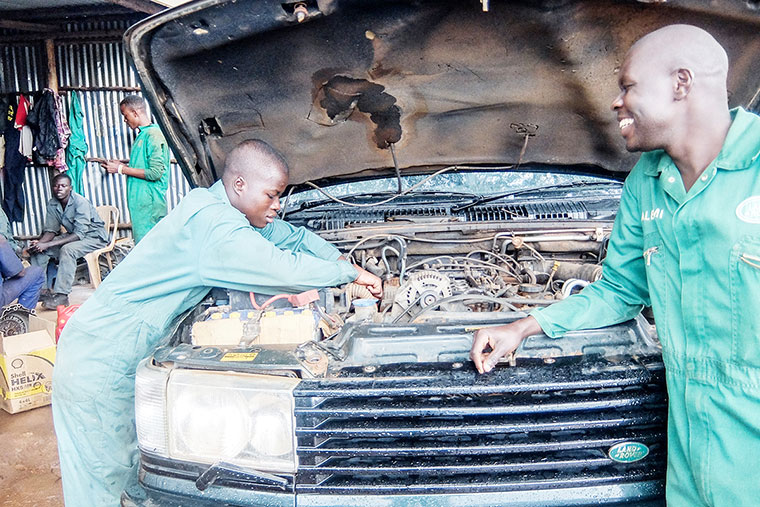 Mechanics working on a car. The draft automotive industry policy will put old-fashioned mechanics out of jobs

A week ago, a friend became the latest victim to the thuggery perpetrated by some car mechanics in connivance with the police at Kisekka market.

As he drove along the road that connects Bombo road to Old Kampala, he was incessantly waved down by mechanics claiming his car was in a dangerous mechanical condition and some ‘bearings’ had fallen out and, therefore, offered to repair it.

The bill after fixing the ‘bearings’ was Shs 3m which he objected. The mechanics refused to budge and he decided to involve the police.

Unknown to him, the police around Kisekka market are partners of the crooks and they were keen that he pays as much as possible. The police advised that he pays Shs 2m. He smelt a rat. How could the police be quick to offer to mediate and significantly drop the figure by a million shillings?

He ended up paying Shs 500,000 and learning immediately, that his car had no problem and the ‘bearings’ which they claim had fallen from his car where actually of a Toyota whereas he drives a Subaru. Many people have fallen victim to these thieves and parted with substantial sums of money.

At the same time as this friend was going through this ordeal, the ministry of Science, Technology and Innovation publicized the draft Automotive Industry Policy, which aims at providing an enabling environment to attract value addition investments for import substitution through supply chain localization across the automotive industry value chain, enhance motor vehicle standards and environmental stewardship and regulate vehicle imports and promote export.

The draft policy also aims at reducing the importation of used vehicles by 60 per cent and increase brand new ones by 50 per cent by the year 2030. Additionally, it proposes that by 2030, at least 10 per cent of the cars in the country should be electric vehicles.

One of the main reasons mechanics at Kisekka market have resorted to underhand methods is due to their inability to repair newer model vehicles. For a couple of years now, Uganda capped the importation of used cars at 15 years, meaning that today you can only import a car made in 2005 or later.

The majority of our mechanics have never been to any professional training school, learning their trade mainly from makeshift garages of relatives and villagemates. Some have ended up excellent mechanics, but the majority have no skills beyond bolting a nut.

The technology in newer model cars is so advanced that it needs some skills which the Kisekka market lot has failed to master as many can’t read or write; so, they cannot teach themselves a few things off the internet.

The easiest way for them to survive is to become conmen looking for people like my friend to shortchange. For many years, car repair workshops have been for the riff-raff operating under mango trees. Many times, the cars are repaired based on guesswork without any devices or deployment of technology to confirm what could be wrong.

At times, the mechanics get it right; but often, the guesswork leaves many car owners frustrated. The garages that belong to brand new car dealerships are unaffordable to the majority of Ugandans who buy cars that were made when they were babies.

This new automotive industry policy, if passed and implemented, will put many of the current mechanics who don’t want to learn anything out of jobs.

However, it will create a new type of car repair workshop or garage as we prefer to call them.  The future car owner in Uganda knows how to read and with the internet can quickly source parts from anywhere in the world. Before they take a car to a garage for anything, they would have read about it and only need somebody who can fix it.

Diagnosis kits are going to be necessary for a mechanic to own – continuous learning of how technology in cars works will be priceless.

Many electric and even internal combustion engines are going to be updated the same way we update the apps on our smartphones. Some of the stuff that previously required a mechanic will now be repaired through app and system upgrades.

The garage under the mango tree is also over. Somebody isn’t going to take their fancy car to a guy who can’t spell their name anymore.

Fancy garages are going to replace those under the mango tree same way electric hair clippers eliminated the guys who operated under a tree shade. I have seen some entrepreneurs coming up with such fancy garage along the Kiwatule-Najjeera road and to say that they are swamped is an understatement.