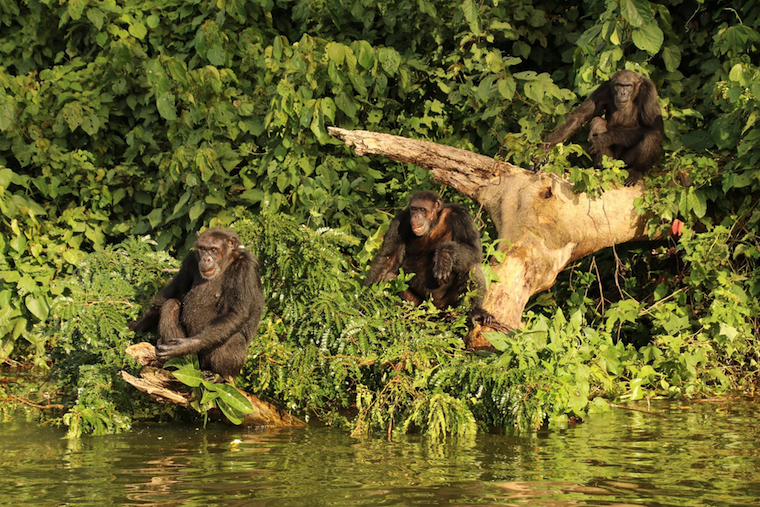 Chimpanzees at the sanctuary having a good time

You’ve got to give it to Kisembo. With a wide chest that defines his short torso, Kisembo does not run around much. And why should he? He is the alpha male chimpanzee at Ngamba island, who everyone shows respect and obedience.

It is when the time for feeding draws closer that Kisembo’s dominance over the chimpanzee sanctuary at Ngamba island comes in full flight. A couple of minutes into their scheduled time of feeding, loud hoots and foot stomps sound out.

Kisembo is usually in the middle park. Food delays create a situation of agitation. His eyes peer through the electric fence that skirts around most of the acres of land – usually with a wild setting – around the island.

Any vision of some of the island’s staff carrying a bucket of food – most times fruits – sends wild screams of joy. The chimps scamper around, some engage in fights, most of them trying to mark their territory.

And when the food is thrown over the fence, the battle starts. The brave push the meek to the fringes. Mothers fight off bigger bullies for their infants. The old try to grab some for the young, depending on how hungry they are. It can be chaotic. Somehow, they all get food to eat. The first few minutes of the feeding presents a perfect example of how territorial chimpanzees are.

Kisembo, on the other hand, gets his food with calmness. Any attempt by any other chimp to grab food from him will attract the kind of beating that sends out a stern warning to the rest who wish to dare to pull such a move.

When Kisembo gets food, he goes to a spot and starts eating. He ignores the commotion around him in royalty style. Usually, Kisembo’s allies sit beside him and beg him for some food in case they did not get enough. He continues to feed and, depending on which mood he is in, might decide to share. Food time at Ngamba island is sheer politics at play with Kisembo managing the rhythm in the gallery.

For the last couple of months, one man has managed to ensure that food supplies at Ngamba island, which is located in Mukono district, are not interrupted.

Alain Goetz, the former chief executive officer of the Entebbe-based African Gold Refinery, kicked off a culture of taking food supplies to the island while he was still actively involved at the company. The spirit of that culture remains alive to this day.

Last week, officials of African Gold Refinery (AGR) took another assortment of goods to the island, where the company was officially recognized with a certificate and a placard on the wall of sponsors.

“It is sad what is happening to the place,” Goetz said after hearing the ordeal of the sanctuary a couple of months ago. “It is always a great pleasure for us to do what we do for Ngamba island, and I pledge to continue supporting the sanctuary until the tourists return,” he added.

Goetz was speaking about the twin effects that befell the island earlier this year, when the spread of the coronavirus led to a spate of lockdown measures that kept tourists away, and later on the floods that battered the area, submerging some of the facilities.

Due to these effects, Ngamba island has been financially-constrained, considering it depends heavily on tourists for support. With most companies cutting down their costs in order to survive the coronavirus’ effects, support funds have dropped to a trickle.

While the sanctuary is slated to open to tourists at the start of October, the officials there feel that it will take a while before tourist numbers swell to the level they were before coronavirus hit the country.

African Gold Refinery sends food to the island after every 10 days. The chimps are usually fed fruits such as watermelons, oranges, bananas, just to mention a few. There are currently 50 chimps at the Ngamba island sanctuary.

The company could not divulge the value of the food it sends, but officials at the island say it is in millions of shillings.

Amos Okello, one of the animal keepers who has worked at the island for more than a decade, said he was “very happy” by AGR’s gesture, adding, “the company has been there for us for a long time.”

“It is not always easy to be on our wall [of sponsors],” Okello said of a wall that has few Ugandans such as Lt Gen James Mugira, adding that “some of the dreams we had have been achieved,” due to the support from companies like AGR. He was speaking to AGR top staff who had taken food to the sanctuary.

Titus Mukungu, the veterinary doctor at the island, also has nothing but praise for AGR, attributing the food support to the survival of chimps in these days of Covid-19.

“We are worried about the spread of the coronavirus. As you know, chimpanzees are almost like humans. Like us, they also depend on feeding to boost their immunity against coronavirus,” he said. He added: “this food that you have brought us is helping their [chimpanzees’] survival during these difficult times.”

Phillip Sekulya, the assistant sanctuary manager, explained that a chimpanzee eats food that is equivalent to a tenth of its body weight every day. A mature chimpanzee has an average body weight of 65kg.

And it is partly for that reason that Kisembo and his allies take food seriously. Chimpanzees such as Mao that are not yet welcome in the political arena that Kisembo rules stay in their cages.

Oftentimes, when Mawa is fed porridge, he takes the metallic dish in which the porridge is served inside the cage, licking it all over. After he is done licking the dish, he refuses to hand it back to the staff.

To get it back, the chimp has to be ‘bribed’ with a banana. When a banana is brought, Mawa quickly returns the dish and stretches his hand out from the cage to grab the banana.

“It is the only way to get back the dish. And if you don’t give him the banana, he will never trust you again,” Sekulya said.

At the chimpanzee sanctuary at Ngamba island, food and trust are very critical elements. And in African Gold Refinery, the sanctuary has gotten that and more.