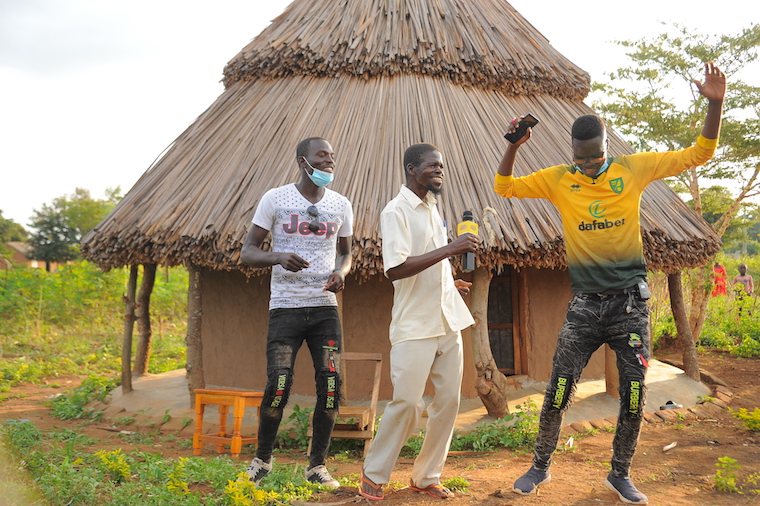 Magino, one of the winners in the MTN MoMo promotion

For three years running, telecom giant, MTN Uganda has run an annual Mobile Money promotion known as MoMo Nyabo in which all MTN subscribers are eligible to participate and stand a chance of winning cash prizes.

The Covid-19 pandemic presented a different scenario, with people’s lives being affected adversely affected both on a personal or business perspective. To that end, MTN decided to stand with its customers as they went through the rebuilding process.

This year’s MoMo Nyabo promotion focused on giving out mobile money prizes, with the aim of helping people to financially rebuild following the devastating effects of the Covid-19 pandemic that has left many people financially struggling.

After the six-week promotion that saw over Shs 1.2 billion in prize money and over 7,000 winners from all walks of life and different parts of the country, Steven Nsubuga, the MoMoNyabo project manager had this to say: “We have seen winners including teachers, farmers, hairstylists, students, business people, cab drivers and many others and we hope their prize money goes a long way in helping them during this period as they rebuild.”

He added; “More and more customers are embracing MTN MoMo because it is convenient and versatile with customers making all kinds of payments, sending and receiving money across Uganda, throughout East Africa and indeed around the world and customers are also saving and borrowing using MoKash”

As suggested by name; “MoMo Nyabo Together”, the promotion saw the winners sharing some of their prize money with their loved ones or communities as a way of helping each other rebuild ‘together’ as we continue coping with the effects of the pandemic.

For instance, Elikana Ecima, a headteacher from Arua in northern Uganda, one of the winners who got Shs 5 million chose his wife Angucia Neria as a beneficiary for the money he won. Whereas Neria walked away with Shs 2 million, he stayed with Shs 3 million.

Ecima was one of the several winners who took part in the MoMo Nyabo Together TV game show hosted by Zahara Toto and Patricko Mujuuka. There were 2 daily winners from Monday to Friday randomly chosen and called in the TV show. Apart from the winners like Ecima who were called in studio, there were 250 people who won Shs 50,000 every day which was sent to their phones using MTN MoMo. All they had to do was pay for anything using MTN MoMo and stand a chance to win.

According to Stephen Mutana, general manager MTN mobile financial services, this promotion was aimed at giving back to the customers that have supported MTN and the MTN mobile money services altogether.

“The promotion came to a successful end last week and we couldn’t be any happier. We are glad we were able to not only give back to our customers but we also showed our commitment to stand with our customers during hard times such as this one,” Mutana said.

He urged the MTN customers to continue using MTN MoMo because of its safety, convenience and affordability. Christina Molly Kabuye one of the MoMo Nyabo Together promotion winners from Sembabule district praised MTN for remembering its customers, especially in these hard times.

Like Kabuye, many of the winners were thankful to MTN for choosing to reward them with mobile money at a time when they least expected it. From paying hospital bills to revamping businesses and paying school fees, the MTN MoMoNyabo Together promotion has resuscitated the lives of many Ugandans and their loved ones in so many ways.

Having run the impactful MTN MoMoNyabo promotion between July and August to help its customers rebuild from the devastating Covid-19 financial disruptions, MTN Uganda has, this month of September shifted its attention to protecting its customers and the entire nation at large by encouraging mask-wearing as one of the most effective ways of preventing the virus.

Dubbed #WearItForMe, the campaign will see MTN reach out to the communities to embrace the much-needed behavioural change as a way of fighting the spread of coronavirus.