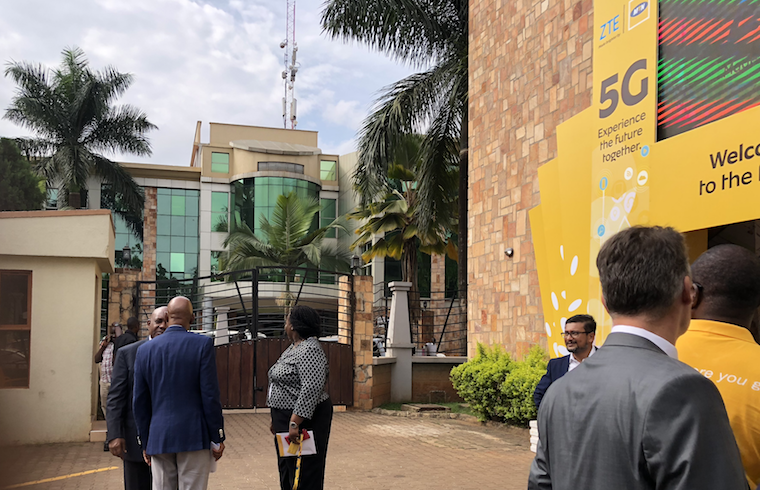 MTN officials during the unveiling of 5G technology earlier this year

South African telecoms giant MTN appears to have avoided paying any capital gains tax in Uganda on the lucrative sale of its investment in mobile phone masts in the country.

MTN’s latest financial statements, published in August, say it made a 1.3 billion rand profit (Shs 312.5 billion) from the sale of its stake in the telecom tower business which carries its cellular traffic. But although Uganda usually taxes capital gains on such sales at 30 per cent, which could have meant a bill of up to Shs 94 billion, MTN’s results say the profit was “non-taxable”.

A Shs 94 billion tax windfall for Uganda could have helped to combat the health and economic emergency caused by the Covid-19 pandemic. Both MTN and the Uganda Revenue Authority have so far been unwilling to explain why MTN’s profit is “non-taxable”.

The Observer and Finance Uncovered, a UK-based journalism organisation, have been investigating the tower deal. We asked MTN to explain the tax position on three separate occasions without getting answers.

However, a source with knowledge of the issue said MTN Uganda requested a private ruling on the tax treatment of the transaction.

“They are waiting for the URA to pronounce itself on the matter. They would not have asked for the ruling if they were confident that the transaction was not taxable,” the source said.

This suggests, contrary to what MTN stated in its recent financial statements, that it may not be completely confident that its capital gain is “non-taxable”.

The source said that the URA might still decide to try and collect tax in Uganda. One reason why the capital gain might not be taxable in Uganda is that MTN had structured its investment in the towers via a joint venture company in the tax haven of the Netherlands, called Uganda Tower Interco BV.

MTN has sold its 49 per cent shareholding in this Dutch joint venture company, which ultimately owns the towers, not the towers themselves. The buyer was MTN’s partner in the joint venture, American Tower Corporation (ATC), which now owns all of it.

Another possibility for the profit being “non-taxable” is that the sale may have fallen outside the limits of Uganda’s capital gains tax law. Since both MTN and the URA are being tight-lipped, it is not possible to know for sure.

MTN sold a similar investment in telecom towers in Ghana to ATC in March via a holding company in the Netherlands and says its profit there was also “non-taxable.”

MTN has followed the common practice of multinationals owning their investments via holding companies which are located in tax havens – the Netherlands is a particular favourite. A multinational can often avoid a huge tax bill on its capital gains, when it decides to sell the investment, by selling the shares of the tax-haven company instead. This means that the capital gain is booked in the tax haven, not the country where the investment is located.

Policymakers are under growing pressure to respond to this form of tax avoidance which is technically known as an “offshore indirect transfer”. The World Bank and International Monetary Fund have warned that the practice is “a concern in many developing countries, magnified by the revenue challenges that governments around the world face as a consequence of the COVID-19 crisis.”

Jane Nalunga, the director of Seatini Uganda, a civil society organisation that advocates for tax justice, says there is a need for the government to offer more clarity on which transactions are taxable, to avoid any leakages of public revenues.

“The onus is on the Uganda Revenue Authority and the Ministry of Finance to ensure there is clarity in the tax laws. International corporations are in the business of making more money and reducing their costs. So, if they can exploit a gap in the tax laws, they will do it, and that is legal,” she said.

However, she added: “I think that multinational companies have an obligation to pay tax because the public will hold them accountable later.”

The source we spoke to with knowledge of the issue who did not want to be named said: “Uganda has struggled to plug the tax revenue loopholes on such disposals by making numerous amendments to its income tax act, such as including a more detailed description of immovable property. But the problem still persists.”

The costs of assets being sold indirectly via tax havens can be huge. In July 2020, a report by Finance Uncovered and Oxfam Novib showed that in just six such deals, developing countries missed out on US$2.2 billion in capital gains tax.

There is no suggestion that MTN might have broken the law because such arrangements are not illegal. They are designed to avoid tax by legally exploiting weaknesses in national tax laws, as well as the tax treaties which countries such as Uganda have signed with tax havens like the Netherlands in the hope of attracting more foreign investment.

Uganda is renegotiating many of its tax treaties with other countries, starting with the tax havens of the Netherlands and Mauritius, and other tax treaties are scheduled to be renegotiated later, according to an official from the URA

But the bottom line is that although the towers and the business they generate are both in Uganda, it remains unclear whether the country will be able to tax MTN’s very large capital gain from the sale. Uganda has struggled in the past to tax offshore capital gains.

Although disputes with Tullow Oil have been resolved, the URA has not yet collected an estimated US$38m on profits made by the UK owner of Umeme when it sold out of the electricity distribution firm. The UK owner, an investment fund called Actis, did not respond to requests for an update for this article.

The country has also not been able to collect US$85 million in tax on the capital gains of Zain International BV from Celtel Uganda which was originally charged in 2014.

It is understood that six years on, this case is still stuck in discussions between Uganda and the Netherlands about whether their tax treaty allows Uganda to collect this tax from Zain. The URA did not reply to a request for comment on the case.

In response to the Zain case, Uganda tightened up its law on capital gains in 2018. However, sthe revised law only applies when the seller owns more than 50 per cent of the investment, whereas MTN only owned 49 per cent of Uganda Tower Interco BV.

This may also be a factor in MTN’s tower profit being “non-taxable”, though it is not possible to be sure unless MTN or the URA provide more information than they have so far.

MTN paid Uganda US$100 million in June to extend its telecoms licence till 2032. In tax terms this is a separate issue from the tower sale, however.

0 #1 kabayekka 2020-09-08 09:42
This sort of economic dilemma forced many African leaders to run to their bank accounts with tears in their eyes.

The ball can only stay put in the goal posts of the international fraternities. Economic technology these days is very much at its fastest speed than these miserable politicians who are ever struggling to be elected for ever!
Report to administrator
0 #2 kabayekka 2020-09-08 09:48
Jesus advised that abaana bensi eno(aba malaika wa Setani!) bagezigezi nyo okusinga abaana ba Tonda(abatukirivu ba Katonda!)
Report to administrator