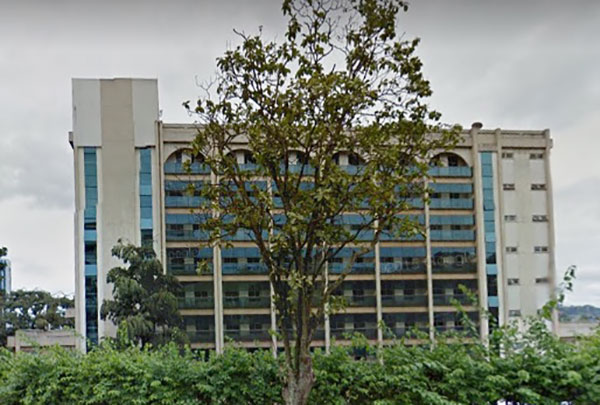 Businessman Peter Kamya, the proprietor of Simbamanyo Estates, is embroiled in a multi-billion court battle with Equity bank.

This was revealed following the bank’s move on August 7, to advertise the potential sale of his properties such as Simbamanyo house and Afrique Suite in Luzira if he does not clear the bank loan.

Court records, a copy of which The Observer has seen, reveal that Simbamanyo through their lawyers Muwema & Co. Advocates, sued Equity bank and another for breach of trust, unethical and illegal conduct as well as predatory practices.

When contacted, Kamya confirmed this.

“It was not only scandalous particularly during this Covid-19 time but also frivolous in the extreme and outright contempt of the court process for Equity bank to do this in complete disregard of the ongoing court case. This must have been in the hope of upstaging the court process and embarrassing Simbamanyo as well as causing unnecessary alarm and despondence in the public domain,” he said.

A top official from Equity bank, who preferred not to be named because he is not authorized to speak on its behalf, said the bank will go ahead and auction Kamya’s assets if he doesn’t comply and pay. “You ask him if he doesn’t owe us money. He is just stubborn and doesn’t want to pay. Anyway, we do not engage such sensitive matters in the media.”

On August 20, 2012, Equity bank Uganda and Equity bank Kenya granted a loan facility of $6m to Simbamanyo to finance construction of a hotel on land comprised of Kyadondo Block 237 Plot 95 land at Luzira and also to take over Kamya’s prior loan from Shelter Afrique.

Under the arrangement, Equity Bank Kenya was described as the lender who advanced $2.5m out of the total loan granted whereas the remainder of the loan $3.5m was lent by Equity Bank Uganda.

In court, Kamya claims that while servicing loan, he ran into payment difficulties due to the banks’ unlawful debiting of the loan account. “There were fabricated and unexplained amounts and uncertain interest charges, leading to the accumulation of colossal arrears,” he states.

He further claims that when Simbamanyo started questioning this unfortunate state of affairs, Equity bank advised him to sell the land he owned at Munyonyo and use the proceeds to clear the accumulated arrears and also part of the loan.

The bank subsequently brokered a deal with Eritrean investors, the Bahamas group, to buy the land for Shs 5.5 billion.

According to his affidavit, Equity bank supposedly offered Bahamas a loan to buy the land and were requested to put down a deposit equivalent to 40 per cent, Shs 1.3 billion. Kamya claims he never saw the loan offer nor the loan agreement.

He further adds that the Bahamas group paid the bank to clear the accumulated arrears but Equity bank negated on the loan.

After three years of the stalemate, Kamya claims that in 2015, Bahamas lodged a caveat on the land requesting for refund of the deposit they had made.

“I pleaded with them to lift the caveat so that I could sell part of the land and refund their money but they refused,” he says.

That was the start of the legal battle that continues to rage on two fronts; first on one hand pitting Bahamas against Kamya, while he also sued Equity bank.

Through Simbamanyo, he sued Equity bank in 2016 challenging the unlawful debiting of the loan account, whose debt stood at $7.1m.

“There are fabricated and unexplained amounts and uncertain interest charges that led to the accumulation of such colossal arrears,” reads part of the pleadings.

Later, High court granted Simbamanyo an injunction, restraining Equity bank from selling the securities. However, the injunction was on condition that Simbamanyo deposits 30 per cent of the debt.

Later, Kamya filed a constitutional petition against Equity bank and the Attorney General, challenging the constitutionality of this condition. In the petition, he said that by demanding pre-payment of 30 per cent of the disputed debt, the plaintiff’s constitutional presumption of innocence was being eroded.

So, in an effort to stop the escalation of the court case, Equity Bank Uganda and Equity Bank Kenya brokered a new deal with Bank One from Mauritius to lend $10m to the plaintiff to offset the old loan with the Equity bank lenders.

Furthermore, Simbamanyo was required to pay loan processing fees amounting to $200,000 and quarterly loan and interest repayments of $398,000.

In the pleadings, Kamya contends the two Equity banks compelled him to take the above loan by means of undue influence because at the time of the refinancing deal, the Equity Bank Uganda had taken foreclosure measures on the mortgage and was actively threatening to liquidate and sell Kamya’s securities by public auction.

“In fear of the above adverse actions of the two Equity banks, the plaintiff yielded and accepted the third party loan offer from Bank One, which was made on November 16, 2017 for a bridge loan of $10m for purposes of refinancing the existing loans,” reads part of the pleadings.

“Equity Bank Uganda, in concert with Equity Bank Kenya, and Bank One stood in a stronger financial position as lender and they intimidated, dominated, took advantage of and exploited the weaker position of the plaintiff as borrower by making it enter into the illegal and predatory loan agreements largely meant to benefit the lenders and their brokers to the detriment of the plaintiff. The above statement clearly indicates that the loan outstanding to the 1st and 2nd defendants was only $ 7.1m and not $ 8.1m as claimed. Therefore, the defendants over paid themselves by $910,476.”

Kamya contends that the two Equity banks entered into the tripartite loan agreement with him to transact financial institution business with the full understanding that Equity Bank Kenya is not licensed to transact such business in Uganda and with the knowledge or means of knowing that it is illegal and prohibited by the Financial Institutions Act 2004.

He further argues that the two Equity banks facilitated and provided legal cover for Bank One to grant the foreign loan through fictitious loan facilities to him with the full understanding that the Equity Bank Kenya and Bank One are not licensed to transact financial institution business in Uganda and with the knowledge or means of knowing that it is illegal and prohibited by the Financial Institutions Act 2004.

The case is still ongoing.