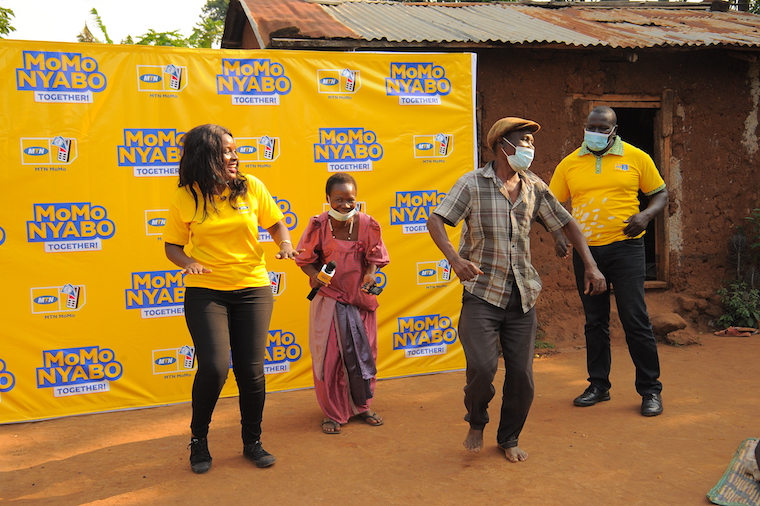 Nanfuka and her husband dancing after receiving being announced winners

54-year-old Betty Nanfuka from Masaka district refused to believe that she had won herself Shs 5 million until she physically saw the MTN Uganda team at her residence in Buwama.

The mother of twelve and grandmother of ten, danced and jubilated while welcoming the MTN team to her residence. Nanfuka said she would use the money she has won to finally build a permanent structure.

“I intend to immediately buy iron sheets so that I can build my dream home. With the rest of the money, I will be able to invest in farming as I already had a nursery bed for my tomatoes.” Nanfuka said.

A security-conscious Nanfuka narrated how she had to first inquire from the area chairman of Sango sub-county if indeed MTN had an ongoing promotion since she does not have a television set and barely uses her small radio.

After confirming that indeed there is an ongoing MTN MoMoNyabo Together promotion where a combined Shs 10 million is up for grabs every day for two winners, an overly excited Nanfuka said she even failed to sleep as she resorted to praying the rosary since it all felt like a dream to her.

Nanfuka has been a loyal client to the MTN brand especially its mobile money service that she uses to pay for Ready Pay solar. Nanfuka chose her husband Leonard Kawuma as her beneficiary; “Amanyi gyetuvude (He knows how far we have come),” she said, in reference to her husband as they danced together. Kawuma received Shs 2 million and Nanfuka Shs 3 million.

The Shs 4.2 million that Nalongo Kevin Namagembe won in the promotion couldn’t have come at a better time. Due to the coronavirus pandemic where the economy nearly stalled and work came to a standstill, Namagembe, a resident of Kikoni, had accumulated medical bills that had stripped her of all her finances yet she still had even other bills to meet.

Namagembe who is a manager at Intertrade Global, eastern region stationed in Malaba has not been able to resume work because of her health complications. Fortunately, she won Shs 4.2 million in the on-going MTN MoMoNyabo promotion and with this money, she will be able to treat her hand that was paralyzed by the illness.

During the lockdown, Namagembe said she used up all she had saved to foot her medical bills; “Transport alone was expensive as I was normally charged Shs 25,000 to get to Mulago from Makerere-Kikoni."

Namagembe thanked God for not forsaking her and using MTN to bless her at a time she needed it the most. Namagembe further said that her health was her major priority and she would use the money she had won to pay for her therapy as well as purchase the different medications she had been advised to buy.

“I can now breathe. I am now able to afford the natural remedies my nutritionist had recommended as well all the medicine I need.” said a happy Namagembe. She shared the money with her father, Matthew Mukasa Ssentamu.

Apart from the two daily winners of up to Shs 5 million, another 250 people win Shs 50,000 each directly every day. To win, all MTN subscribers have to do is pay for airtime, data, voice bundles, Yaka, water, television subscription and so much more using MTN MoMo and stand a chance to win.

You can watch the live draw game shows every weekday at 8.20pm on NBS TV and Bukedde TV hosted by Zahara Tooto and Patricko Mujuuka.