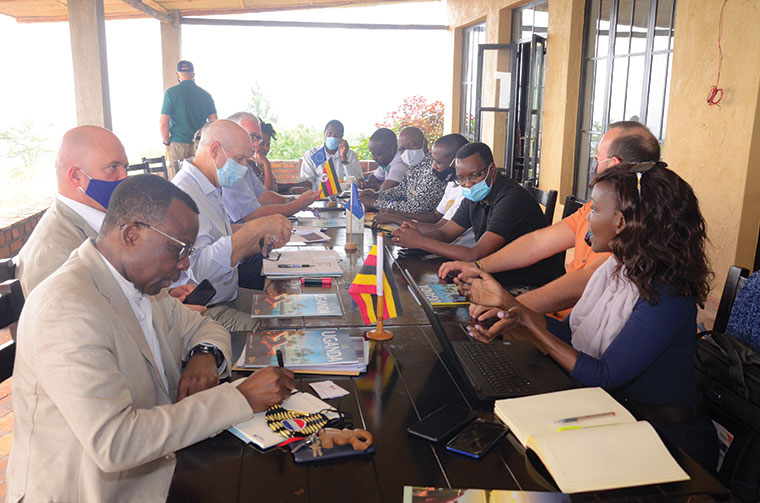 Tourism and hospitality sector players want government to come up with a comprehensive plan for re-opening of the Entebbe International Airport to mitigate adverse effects of the pandemic on the sector.

United under the Uganda Hotel Owners’ Association (UHOA), the operators insist that the lack of a tentative plan is creating a lot of skeptism that discourages foreign visitors into the country, writes YUDAYA NANGONZI.

In March, President Museveni directed the closure of the airport in a bid to halt the spread of the coronavirus. The directive was scheduled for 32 days then, but has since been extended indefinitely as Uganda eases the lockdown.

While meeting EU heads of mission at Elephant Plains lodge in Kasese recently, the tourism sector players commended government on its Covid-19 interventions but insisted that many hotels and lodges will not see meaningful business until a clear plan on the airport is released.

The sector operators said meeting envoys is a big case for the sector since they clearly appreciate their plight as opposed to sending them emails from the comfort of their offices and homes in Kampala.

“Tourism works under a predictable environment and none of us players want the airport opened soonest. We don’t mind having concrete tentative dates so that it eases our marketing strategy with international affiliates,” Byamugisha said.

“If these affiliates don’t know when the airport will reopen and are already drafting their itineraries, you easily miss out on that plan and it’s very difficult to be included once you weren’t part of the draft.”

Byamugisha added that tentative dates provide anticipation and certainty for their foreign marketing partners to rebook visits of tourists.

Uganda has more than 6,000 accommodation facilities with 95 per cent privately-owned and less than five per cent aided by government. Kampala has the biggest number of hotels at 28 per cent. The rest of central region takes the largest share at 24 per cent followed by Western 22 per cent, Eastern 15 per cent and Northern with only 11 per cent.

Byamugisha said government is set to lose more income in the form of PAYE and NSSF since most hotel staff are no longer earning. Hotels pay 25 different types of taxes and licenses “with many duplicating one another.”

“As the hospitality sector, we are out of business. Unfortunately, 2021 is meant for elections and we are completely out because traditionally, election years are bad for tourism in developing countries. We surely hope to resume business in 2022,” she said.

In 2019, Uganda registered 1.6m guests. A new target of four million tourists was set by 2020 but this is unlikely to happen with just five months to the end of the year.

In a letter dated March 17, 2020, to the Finance ministry, Susan Muhwezi, the UHOA chairlady, indicated that the tourism industry in Uganda was experiencing severe financial uncertainty with the cancellation of accommodation, tours, meetings, and conferences originally scheduled to be hosted in the country.

This, she said, was mainly because a majority of the most Covid-19-affected countries compose Uganda’s biggest market.

“International tourist and business arrivals have registered a negative growth of one per cent to three per cent, translating into an estimated loss of $30 billion to $50 billion. Before Covid-19, arrivals were predicted at a positive growth of three per cent to four per cent for the period (year to date) for 2020. As of March 15, 2020, an estimated $2,089,129 had been lost in cancellations from only the top five city hotels alone,” reads the letter.

With cancellations and low business turnover, it is proving extremely difficult for hoteliers to meet their loan obligations, pay taxes, salaries and other business overheads during this period.

Dickson Kateshumbwa, the chairman of the Tourists Lodge Owners’ Association, is among the proprietors struggling to repay a Shs 5bn loan from Uganda Development Bank and Equity bank.

He borrowed the money to refurbish his Park View Safari lodge in Rubirizi and construct Gorilla Heights lodge in Kisoro.

“We had planned a grand re-opening for Kisoro in March and with more than Shs 2bn in summer bookings until coronavirus hit us. All these foreign bookings were cancelled. I have Shs 5bn on my head to pay yet no income and bookings are coming in,” Kateshumbwa told The Observer. So far, both banks have given him 12 months to pay the loan but it comes with a higher interest rate.

Muhwezi noted that a substantial number of stakeholders are currently servicing loans at very high-interest rates between 19 and 25 per cent.

With the staggering loans, operators don’t expect tourists soonest after travel restrictions were imposed on citizens from high-risk countries of the pandemic.

In an interview, the Italian ambassador, Massimiliano Mazzanti, said as long as standard operating procedures are observed, there’s no need to close doors for foreign tourists.

“In reality, we shouldn’t see tourists from worst-hit countries as a potential threat. We need to find a balance in securing the citizens as well as lifting the economy,” Mazzanti said.

He added: “Italy is still recovering from a huge loss of human lives and Covid-19 cases but we are finally stabilizing and injecting some money to recover the tourism sector. We have opened the airport to anyone from Europe in the first phase to come and enjoy tourism.”

Mazzanti said Italy would like to support the tourism sector but Uganda is not marketing itself enough globally.

“You have 10 national parks, incredible nature, and interesting packages, which are more convenient than neighboring countries but you need to strategically make people aware of your product,” he said.

IS DOMESTIC TOURISM AN OPTION?

As foreign tourists continue to outnumber local citizens, tour operators have also urged government to use this period to promote domestic tourism.

According to Amos Wekesa, the proprietor of Great Lakes Safaris, a tour and travel company, Uganda has great potential in domestic tourism to advance the sector. He cited 2019 figures in which 223,000 Ugandans visited Kenya as tourists due to better marketing strategies.

“Ugandans are willing to spend money elsewhere, but not in Uganda. Why? Government needs to address that loophole because even with reduced costs in our lodges, you don’t get the numbers,” Wekesa said.

At Wekesa’s Elephant Plains lodge in Kasese, some rooms have been reduced from $700 per night to about $150 for foreigners given their modifications while Ugandans pay Shs 380,000.

“With the reduced prices, even if I get 100 per cent occupancy over the weekend and no entries during the week, it’s not enough to pay staff salaries. So, If we had more Ugandans planning in advance to come throughout the week, the money can cumulatively cover some bills as we wait for big businesses abroad to set in,” he said.

For Kris Debrief, the proprietor of Enjojo lodge, located in the Ishasha sector of Queen Elizabeth national park, Ugandans seem not be attracted to their unique local destinations.

“It is extremely difficult to attract an ordinary Ugandan to stay in the bush with wild animals. Ugandans say they have no money but prefer to travel abroad and go shopping or sleep in luxury hotels,” Debrief said.

Enjojo lodge survives 98 per cent off foreign visitors but has not received any since March due to closure of the airport.  Before the pandemic, the lodge normally operated at full capacity in January, February, July, August and September.

During the recent one-day accommodation and provision of breakfast and lunch to EU heads of mission and their staff, Enjojo registered some income after five months without cash inflow.

With uncertainty about reopening the airport, Debrief prayed that government preserves all the national parks and wildlife for future tourists.