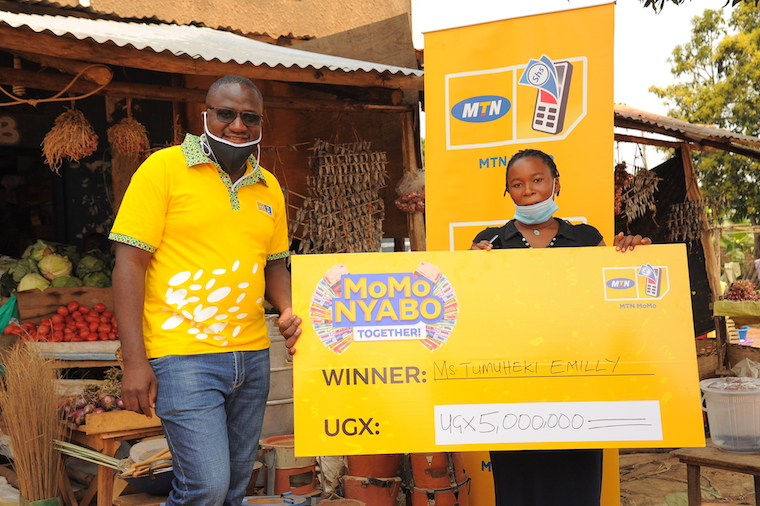 Emily Tumuheki, a private school teacher in Masaka won herself a whooping Shs 5 million in the ongoing MoMoNyabo Together promotion.

Tumuheki is among the many teachers who have gone without pay following the closure of schools in March this year as a preventive measure to prevent the spread of coronavirus. Tumuheki, a teacher of English at Kitendesa Modern primary school could not believe her luck the moment she learnt that she had been chosen as a lucky winner in the MoMoNyabo Together promotion.

When contacted by the MoMo Nyabo Together show hosts Zahara Totto and Patricko Mujuuka, Tumuheki was in shock and decided to hand the phone to a friend of hers thinking she was being conned. Moments later, she was able to compose herself and answer all five questions correctly each worth Shs 800,000 hence winning the full amount of Shs 5 million.

Shedding tears of joy at her cheque handover, Tumuheki narrated how life has been so hard because she has not been earning and yet the bills kept on accumulating. Tumuheki who hails from Ntungamo, moved to Nyendo in search of greener pastures. Currently, she is also pursuing a Bachelors degree in Secondary Education to enhance her career.

Tumuheki was overwhelmed with the fact that she's now become a millionaire.

“I cannot imagine this real. This money will help me a lot. I plan on starting a shop where I can trade food items like rice, sugar, salt and many other consumer goods.” Tumuheki said.

Tumuheki went on to add that because of COVID 19, she had made a decision to quit her teaching job and venture into something else but did not have the capital to start her dream business.

“My life has drastically changed for the better,” said an excited Tumuheki in praise of the MTN MoMoNyabo promotion.

She named her father, Frank Twikirize as her beneficiary. Twikirize was excited when her daughter called to ask if he had received Shs 2 million mobile money that was sent to his phone. An excited Twikirize asked her daughter to thank MTN for remembering them.

“For one to get money in such times, it can only be by the grace of God,” Tumuheki said. While handing over a dummy cheque, MTN Uganda regional manager central Jimmy Ssempuuma congratulated Tumuheki upon her win. He also encouraged all MTN customers to continue using the MTN MoMo service,

Tumuheki said she always used her MTN MoMo to buy airtime, minutes to make phone calls as well as data to surf the internet and social media. She thanked MTN for availing Ugandans with a chance to win money this year.

Apart from the two Shs 5 million each daily winners called in studio, 250 people win Shs 50,000  directly every day. All you have to do is pay for airtime, bundles or any bill using MTN MoMo on the MyMTN app or dial *165# and stand a chance to win

Ssempuuma urged MTN subscribers to continue using mobile money to pay for everything including airtime, data, voice bundles, Yaka, water, television subscription and so much more to heighten their chances of winning.

Watch the live draw game shows every weekday at 8.20 pm on NBS TV and Bukedde TV hosted by Zahara Totto and Patricko Mujuuka. You could be the next winner because with MoMo Nyabo together, everyone is a winner with over Shs 1.2 billion up for grabs.