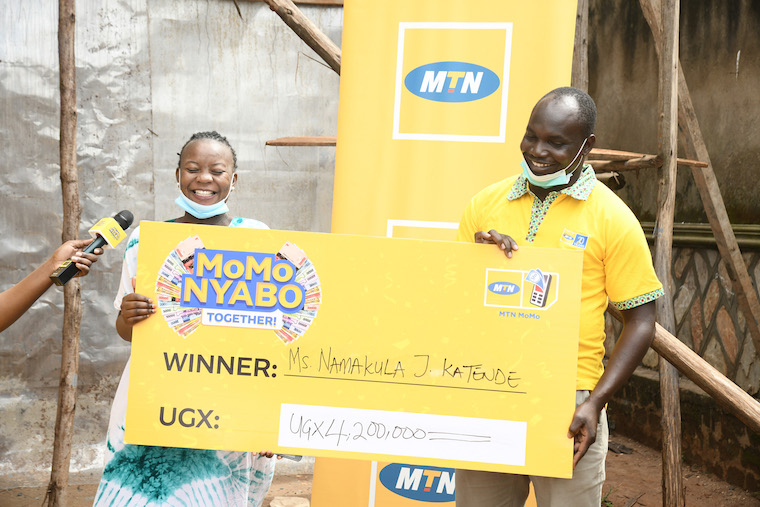 After bagging a whopping Shs 4.2 million in the ongoing MoMoNyabo Together promotion, Janat Katende Namakula, a shoe business owner at Container Village couldn't hide her happiness.

Whereas arcades resumed operations this month, many traders who resumed working recently are struggling to clear their outstanding rent arrears. MTN Uganda subscribers have an opportunity to win up to Shs 5 million every day to help them rebuild their lives and businesses following the Covid-19 financial disruptions.

To enter the draw, MTN customers simply have to use the MyMTN App or dial *165# and buy airtime or data, including paying for utilities and many other goods and services. Namakula, an expectant mother of two has not been working and has been struggling to cope.

“We haven’t been working yet our landlords expect us to pay rent. With this money, I will be able to pay my rent arrears and use the rest as capital for my business seeing as businesses are starting to slowly pick up,” Namakula said.

Since MoMoNyabo Together promo is all about sharing, winners are given an opportunity to share the money they won and Namakula without hesitation named her mother as a beneficiary.

“I would love to share this blessing with my mother because she is one of the people I love most in this world,” said Namakula noting that her mother would also use the same money to revamp her business that was equally affected by the COVID-19 lockdown.

Ronald Gyagenda, a resident of Kanyanya also won himself Shs 4.2 million from the same MoMo Nyabo Together promotion.

“I intend to buy a machine that will ease my work as well as acquire certain building materials,” Gyagenda said when asked on what he intended to use this money for.

He went on to say that it’s unbelievable how one’s life can change overnight.

“I woke up a broke man with many troubles now look at me a millionaire,” he said.

Gyagenda named his wife, Sharon Lillian Nampijja, as a beneficiary. Nampijja was given Shs 1.6 million while Gyagenda remained with Shs 2.6 million.

Gyagenda said the lockdown left him and his household stranded as the work coming in was not as much as it was before. He further added that they struggled with feeding their children as well as paying for rent. Nampijja revealed how she could finally begin construction on her plot of land that she previously acquired.

For Wilson Kwanya, what started as a dream ended up becoming a reality. Whenever Kwanya saw adverts of MoMoNyabo Together on television, he wished and hoped that he becomes one of the winners just like the several other winners that have benefitted from the promotion since it was introduced, three years ago.

Kwanya, a matooke business dealer with a family of nine is the only lucky winner in the week one who managed to win the entire Shs 5 million jackpot by answering all the eight questions correctly. Asked how he was able to bag the all the Shs 5 million, Kwanya said that he frequently uses his mobile money when transacting his business, he has become conversant with the service.

His wife, Aunu Kwanya, a farmer was the other beneficiary farmer who said during the lockdown, it was hard to move and transport her matooke and this resulted into some of her produce to rot away. Although they are not sure when schools will reopen, the Kwanyas say that they will not struggle with tuition for their children after winning the jackpot.

While handing over the money prize, MTN Uganda’s trade manager, Emma Thoryek thanked the winners for using the service and urged other subscribers to continue to use the MTN’s mobile money service to pay their bills, buy airtime, data, or even shopping.

“You never know just like Gyagenda and the rest, you too can win up to Shs 5 million,” he said.

To enter the draw, MTN customers can use the MyMTN App or dial *165# to buy airtime or data including paying for many other services using MTN MoMo and MoMoPay.

Two lucky winners shall be contacted every weekday on NBS TV and Bukedde TV during the MoMo Nyabo Together TV show. Apart from this, 250 other MoMo users will win Shs 50,000 every day that will be directly transferred to their MoMo wallets.