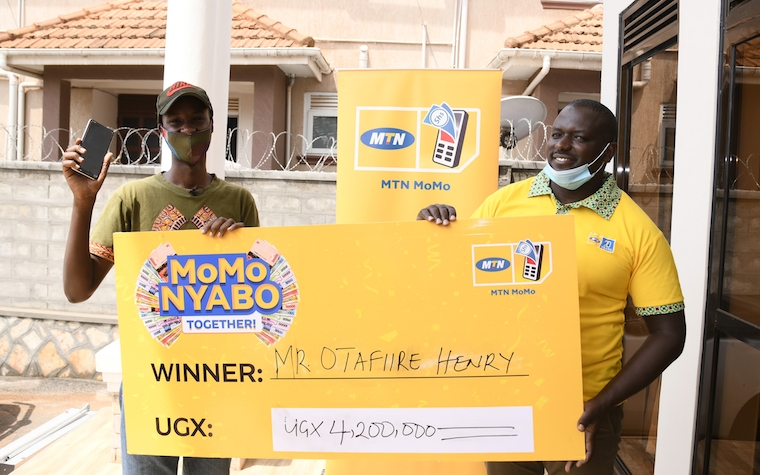 Henry Otafiire, 28, a businessman living with his parents in Najjera, a Kampala suburb is the first winner of MTN MoMoNyabo promotion.

Otafiire, an ardent user of the MTN MoMo service, received a phone call from Patricko Mujuuko and Zahara Toto, the hosts of this year’s show. Otafiire successfully answered all four questions about the MTN MoMo service correctly. Each question was worth Shs 800,000. Otafiire at the end of the game managed to bag himself a whopping Shs 4.2 million.

The economic disruption caused by the on-going COVID-19 pandemic has left several people financially strained, and MTN Uganda through its MoMoNyabo promotion, has come out to give back to its customers in form of cash prizes to help them rebuild financially and take care of their accumulated bills following the economic disruption caused by the pandemic.

Dubbed “MoMoNyabo Together” this year, winners stand a chance to win hard cash for themselves and their loved ones or communities as opposed to the cars which were given out in the previous MoMo Nyabo promotions.

Bridget Kitimbo, a laboratory technologist with the Mulago hospital sickle cell department was the second winner of this year’s MoMoNyabo promotion.

“It seemed like a big joke at first, but I have been seeing the Prosper advert on television so I quickly believed that I was a winner!” said an excited Kitimbo.

Kitimbo has been using MTN mobile money to buy airtime, internet data, voice bundles and paying for her shopping using MoMo Pay. Unknown to her, she was automatically entered into a draw where she emerged a winner.

Subsequently, the MoMoNyabo team visited her workplace where she had to answer a few simple questions to win cash for her and her loved ones. At the end of the day, Kitimbo won a total of Shs 3,400,000. She took Shs 2,200,000 while her father, James Kisambira got Shs 1,200,000 that was instantly transferred to their phones.

Her dummy cheque was presented to her by Emmanuel Thoryek, a trade manager from MTN Uganda. He encouraged her and all MTN subscribers to keep using MTN MoMo. This year’s promotion has made it possible for the winner to also nominate a beneficiary to share the prize money with.

Kitimbo says that with the recent lockdown, public transport fares have been high, something that was a big challenge for her since she has to commute to work every day. Above everything, Kitimbo’s greatest desire has for long been to upgrade her education but she was limited by finances. However, with the money she won from the MTN MoMo Nyabo Together promotion, her dream can materialize.

“Seeing is believing,” Kitimbo said as she received the mobile money message alert. Her joy and excitement couldn’t be hidden. She ululated as she said indeed the promotion is real and anyone can stand a chance to win.

Otafiire, an entrepreneur dealing in the production of yoghurt whose business was hit during the coronavirus lockdown, said that he now has the capital to re-invest in his business.

Just like this year’s campaign slogan, MoMoNyabo Together, Otafiire was granted the opportunity to share the money he won with someone or community of his choice. Of this money, Otafiire got to share Shs 1,600,000 with his beneficiary while he remained with Shs 2,600,000. His sister, Fiona Nankunda reaped from this as she was the one nominated as a beneficiary. Otafiire when asked why he decided to choose his sister said, “We suffer together and enjoy together.”

Otafiire’s sister wasn’t home at the time when the money was sent. When Otafiire called her to confirm whether she had received her share of the money, an excited Nankunda could be heard over the phone screaming having confirmed that indeed she had received Shs 1.6 million.

Byaruhanga encouraged Ugandans to embrace the convenience that comes with transacting using mobile money. According to him, one is able to go about their different businesses at the comfort of their homes, offices and anywhere else. Otafiire encouraged all MTN subscribers to make good use of the MoMo services because once one uses these services, they automatically stand a chance to win and win big.

Apart from the two winners, an additional 250 people win Shs 50,000 directly every day. All you have to do is pay using MTN MoMo and stand a chance to win. MTN mobile money can be used to pay for everything including airtime, data, voice bundles, Yaka, water, television subscription and so much more.

The daily winners are announced in a live draw game broadcast every weekday at 8.20 pm on NBS TV and Bukedde TV hosted by Zahara Tooto and Patricko Mujuuka.