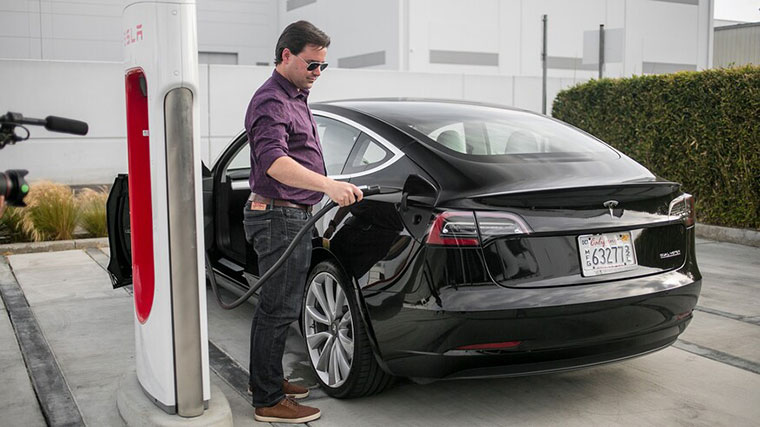 A man charges the battery of a Tesla Sedan at a supercharger station. Fuel stations could soon be replaced with charging centres for non-fuel cars

It was inconceivable 20 years ago that one could use a laptop when they get to work at 8am and leave at 5pm without the need to plug in.

Laptop computer batteries lasted two hours on average with hind-end ones doing four. In Uganda, it is even still a practice for people to own a feature phone and a smartphone simply because the latter’s battery life doesn’t last many hours, especially with the low-end ones.

Feature phones can go for days without the need for charging. High-end smartphone makers are working hard to improve the battery life of their devices. Apple claims that its latest iPhone Pro series can do as much as 80 hours of audio playback and 20 hours of video playback.

However, the biggest developments when it comes to batteries have been in vehicles. We seem to be on the cusp of the internal combustion engine that has been in use for over 100 years. In a few years, electric vehicles will be ruling the world.

Tesla’s Model S liftback sedan is said to have a range of 600km when its batteries are fully charged. Kiira Motors’ Kayoola EVS, a huge city bus that can transport 90 passengers at a time, has a range of 300km.

A decade from now, our lives will be depending a lot on batteries just like we have been so dependent on oil. Batteries will replace generators in homes and some buildings as sources of alternative energy or backup. TV sets and home theatre systems will have their own batteries and so will fridges. CCTV cameras and other security appliances, which don’t have backup batteries will soon have them. Remote controlled gates available in Uganda already come installed with batteries.

Bugala, the major island in Ssese, which is commonly known as Kalangala, is today partly electrified by huge batteries which store power from a sizeable solar farm run by Kalangala Infrastructure Services. Although the service provider compliments these batteries with thermo power at peak hours, the batteries provide all the electricity this island needs. Batteries connected to solar powers light a lot of rural households.

However, innovations in batteries are not projected to match demand. There is still a need for a lot of work if batteries are to power the world as expected and that is where opportunities are for young people. The future of work is in the battery ecosystem and value chain.

Manufacturing and assembling battery parties, maintenance and repair and the entire ecosystem is estimated to be worth $90 billion by 2025. By 2030, it would more than double. I envisage a future with current petrol stations being replaced with battery charging stations. Parking lots of offices, hotels, shopping malls, churches and nightclubs, among others are all going to need charging stations. Are you ready to take your seat?

If you are a young person looking for an academic course and perhaps your parents and/or guardians can afford it, consider one in battery technology development. Are you thinking of a long-term business with enormous potential?

It is in the battery sector. You just need to study the battery value chain and ecosystem and pick your part. The beauty of the battery sector even though it has been in existence for many years, is that it right now affords any young person to try and fail and in a decade as it starts to seriously pick up, you would have established yourself. You would have failed and learnt your lessons and most importantly known what works and what doesn’t.

Tesla already makes batteries that can power homes for days in case of power failure. Even though our electricity generation capabilities have significantly grown, transmission and distribution are not matching the investment. So, electricity supply will always be disrupted whenever it rains or to quote some tweep, whenever “birds decide to have sex on the electricity lines.”

The battery sector is already profitable in Uganda and it will be super profitable when they (batteries) start defining our lives more than they do today, when they start eating into the oil industry’s market share.

A lot of Ugandan youth interested in technology start-ups have been primarily focused on smartphone apps and that market is already saturated. I don’t think we need any more payment, boda boda, or food delivery apps. If you are thinking of a start-up, you should be looking at the battery sector and what you can be able to make or provide.

Happy new year to you all; or is it happy new decade?