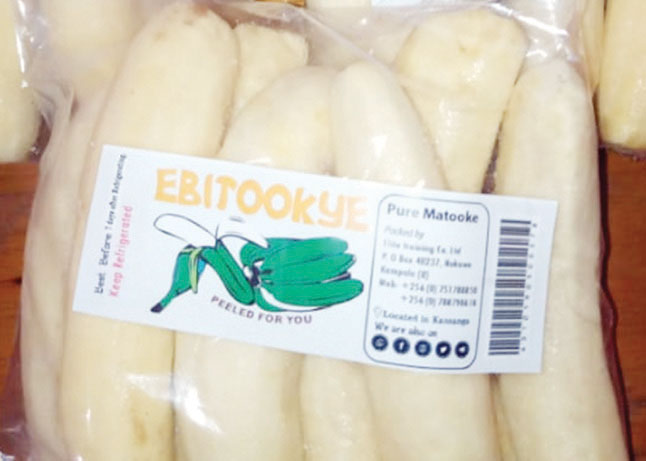 Uganda is considered one of the most entrepreneurial countries in the world. Many adults have started or own businesses. If you are observant, somebody might be setting up a kiosk not far from your home.

In every little corner, there is somebody doing some sort of business. On Sunday, I watched an interesting news story of Thomas Kizza, a student who buys matoke, peels them, packs them and starts vending them, especially to fellow students and corporate employees who don’t want to go through the hustle of peeling.

He operates only in Kasanga area where he lives but peeled matoke are probably needed in most parts of Kampala. All that he needs is probably an app and some scooters so people can make orders and have them delivered everywhere around the city. Perhaps, he could team up with the likes of Safe Boda.

As the journalists were interviewing this innovator, thousands of people blocked two streets in Kampala’s Industrial Area after hearing news from a media house that the leader of the Illuminati (underworld) had made so much money and was extremely unhappy and therefore was to give it away to whoever turns up at the media house’s headquarters.

The minimum he was to give out was Shs 5m per person! It is said that by 2am, people had started turning up and by daybreak, there were hundreds people yet he was expected to arrive at 3pm. The self-appointed leader of the Illuminati obviously didn’t show up, leaving the CEO of the media house to apologize and ask people to leave.

While the CEO was appealing for the crowd to leave after even police had failed to disperse the crowd by firing in the air, the minister of Science and Technology and Innovation, Dr Elioda Tumwesigye, was launching the inaugural national steering committee for the Research and Innovations Fund programme.

The committee’s job will be to operationalize the research and innovation fund by supporting innovators to commercialize their ideas. I have argued for a fund like this before. However, they only have Shs 10 billion out of a budgeted Shs 500 billion. The government needs to put in the money so that what is available isn’t only used for operational costs. And of course, I hope that Prof William Bazeyo and his committee will fund those who really need funding.

A lot of the world’s famous companies that are considered innovative were started with funding from governments. Tesla accessed billions of dollars to go into electric vehicles while other American unicorns like Apple and Microsoft are beneficiaries of the Internet, which we now know is a result of research and development by the USA military.

A lot of Ugandan innovators and entrepreneurs have been unable to commercialize their ideas because it costs a lot of money. Many start as students but once they finish their studies and start struggling with life in Uganda, they abandon their great ideas for pragmatic ones, which can put food on the table in the short term.

They quickly realize that the environment in which they operate won’t make them the next Bill Gates. It is saddening. Not all innovators should be like Bill Gates or Jeff Bezos but they should be in an environment that doesn’t suck out every little energy.   You find that somebody who had an award-winning idea has abandoned it to sell Niigiina shoes — nothing innovative or fancy but profits are good enough to make one survive in a tough city like Kampala.

The research and innovations fund should be able to ensure that our creative minds stay the course and aren’t bothered by how they will buy their next rolex meal. Having said that, recipients of the programme should not substitute fragility with opulent lifestyles. I hope that the programme will also teach these innovators financial discipline and such other things.

Last week, Kiira Motors started testing its new fully electric city buses in Nakasongola where they are being assembled at the Luweero Industries facility.

Kiira Motors have been at it for over a decade trying to become an original equipment manufacturer. I sometimes wonder if any of their engineers would still be around if they didn’t have government support however sporadic the funding might be.

Apart from funding ideas, the programme should also lobby for lower costs on stuff that entrepreneurs and innovators need such as the Internet and make it easy to access credit since not everyone will benefit directly from the fund.