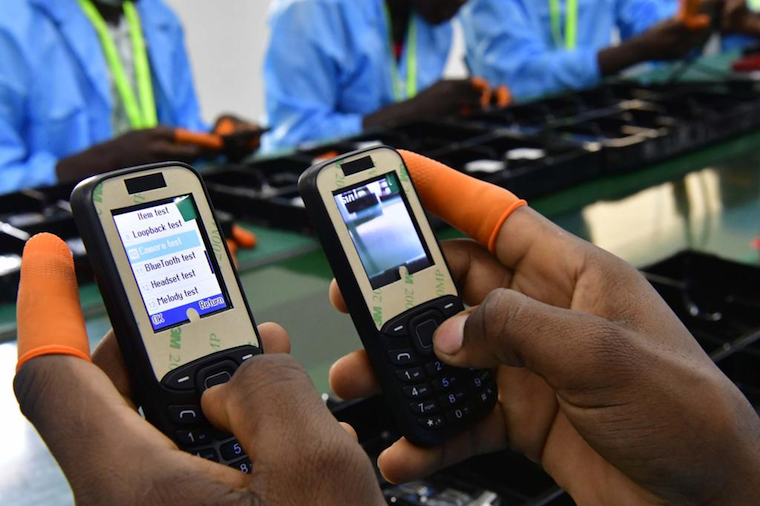 The factory built by Chinese Electronics firm, ENGO Holdings Limited was installed to produce 2,000 mobile phones, 1,500 smartphones and 800 mini slim laptops when it starts operating at full capacity in 2021.

The phone models with dual SIM slots and a memory card will collectively be known as S300 powered 1,400mAh capacity battery. They are enabled with Java capability for playing MP3/MP4 audio-visual files. They receive telecommunications signals using 2GSM and GPRS operating on two bandwidths in the range of 850 -1900.

Museveni said that the Chinese have been Africa's development partners on the path for durable infrastructure development which are critical in the transformation of the economy.

Ares Chow Yu Qing, the executive director of ENGO says that the factory will in future, produce 2,000 chargers, 4,000 USB cables and 4,000 earphones in the third phase of the development of the factory in October 2021.

The company says it is investing $15 million (about Shs 55.6 billion) in phases over a period of five years to achieve optimal output from the initial one million electronic gadgets a year.  Most of the parts currently being assembled were imported from China including mainboards, the 2.4-inch screen, touch panels, battery, cameras, speaker receivers and vibrators.

Frank Tumwebaze, the Information, Communication and Technology minister says that the domestic operation of the plant will revolutionize mobile phone connectivity in rural areas for their affordability and efficiency on power consumption and network reception and clarity.

The other, he said will provide a unique platform for domestic software developers to showcase their innovations to the market in order to penetrate the international markets through exportation of some of the technologies.

Evelyn Anite, the state minister for Finance in charge of Privatization said Uganda has been spending Shs 140 billion on the importation of phones from major electronic companies, Samsun, Itel, Huawei and Nokia among others. She said the factory will in the long run reduce the import bill by producing cheap phones for the country.

James Ssaka, the executive director of NITA said that Uganda's ICT sector has dramatically grown over the last ten years with its annual budget swelling from Shs 104 billion in 2018 to Shs 146 billion in 2019. According to NITA, there are 22 million mobile phone subscribers in Uganda. It says the sector is growing at 27 per cent per annum.