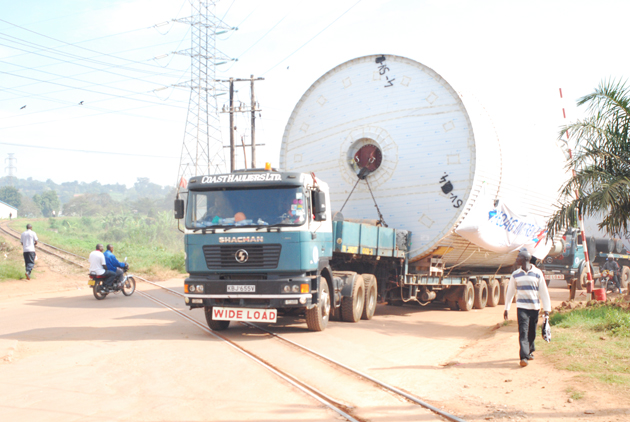 A few weeks ago, I was in Malaba, the busy town along the Kenya-Uganda border.

Over two days, I noticed the same guys who were just chilling around playing cards whenever their fingers were not busy on their smartphones. I decided to engage them. They were truck drivers from Mombasa delivering some factory equipment in Kampala. They had arrived on Sunday but now it was Tuesday.

They told me they couldn’t proceed to Uganda because they were waiting for the road permit. I asked them why they hadn’t applied for it before arrival and they said their bosses had but the minister hadn’t signed. I became curious!

A low-load truck sometimes also called a low bed truck to access Ugandan roads, needs the permission of the minister. If you see a truck usually carrying heavy goods such as tractors or factory equipment written on “Danger Wide Load”, it is only on the road because the minister has signed a road permit detailing where it is going. And yes the state minister for Transport signs the road permit — personally. He signs each permit individually. In 2019!

So, the drivers had arrived at Malaba and cleared everything else that they needed to proceed to Kampala but they couldn’t because the Honorable State Minister for Transport wasn’t in office to sign the road permit!

He appeared in office on Tuesday afternoon and signed them. Once the truck drivers received the message from their boss that the permit was now secured, they celebrated like a Liverpool fan who has just won a Premier League!

This policy, law or whatever it is needs to be changed. A whole minister can’t be signing road permits in 2019. This is work that should be delegated to free up the minister’s time to attend to more pressing policy issues, not whose truck is on the road. The minister also isn’t a technical person when it comes to wide-load trucks; so, why is he signing road permits? Alternatively, since he simply appendages his signature, he could consider having a digital one his staff could insert for whoever needs a permit.

Also, companies involved in the logistics business could have road permits issued annually. I know that each permit specifies the type of load to be carried but all that is just unnecessary red tape.

This issue of waiting for the minister to sign permits makes doing business very expensive. Truckers spent three days at the border chilling instead of delivering the goods. The shipper incurred extra costs paying for trucks for the day they were simply packed and lost business.

The bank that extended money to the shipper to have his factory set up won’t delay to demand interest when the loan repayment time comes, yet he lost time waiting for the minister to sign road permits.

It is such bottlenecks that make it difficult to do business in Uganda. That is why it is way cheaper to transport cargo from China to Mombasa than Mombasa to Kampala, a much shorter distance. Apart from ministers signing road permits, there are so many other roadblocks as well as roads that are narrow.

Talking of roads, I also recently learnt that all districts and municipalities in Uganda don’t have heavy equipment such as excavators and bulldozers necessary in maintaining roads. The equipment is expensive; so, the government created some regional workshops which they equipped to serve these districts. But the districts per region are simply too many. The workshop in Bugembe serves the whole of eastern region as well as Karamoja. It is not feasible that they can do a great job, given the vastness of the region.

But that isn’t the major problem. To get a low loader and bulldozer, the district writes to the permanent secretary(PS) of the ministry of Works and Transport requesting to use the equipment.

Alternatively, an electronic system can be set up where stakeholders could sign in, see the earliest time the equipment is available and make a request. That’s what e-government that we sing about should be about.