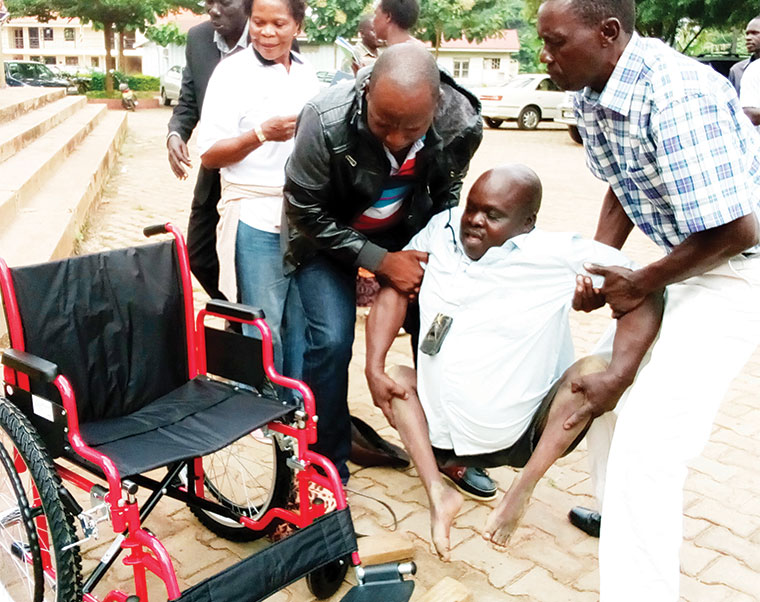 A disabled man from Oyam being lifted to his wheelchair in Lira. The law protects persons with disabilities from any form of discrimination

On paper, things do not look too bad for persons with disabilities (PWDs) in East Africa as far as access to information and utilization of modern information and communications technologies (ICTs) is concerned.

Each of the East African countries has enacted several laws and policies that seek to promote the rights of persons with disabilities, including access to information and ICTs. Unfortunately, these haven’t translated into much impact due to lack of implementation but a new initiative led by Collaboration on International ICT Policy in East and Southern Africa (CIPESA) seeks to address the gaps and enhance the plight of PWDs, writes DERRICK KIYONGA.

According to CIPESA’s research report entitled: ‘Removing Barriers: Improving ICTs Accessibility for People with Disabilities in East Africa,’ many of the laws remain unimplemented, leaving persons with disability in very disadvantaged positions.

“As countries advance in ICTs and others continue to enjoy the benefits that come with these advancements, we are seeing an increase in the digital gap, especially with persons with disability. Our research shows that there are several factors that are contributing to the deepening of this exclusion,” said Paul Kimumwe, the senior programme officer for Research and Advocacy at CIPESA.

“The legal and policy framework is just good on paper, but not being implemented; there is very limited investment in telecommunication infrastructure that supports ICT access for persons with disabilities, and of course the lack of access to the required assistive technologies such as screen readers, screen magnifiers and braille.”

In 2003, for example, Tanzania adopted the National ICT Policy to, inter alia, “give special attention to providing new learning and ICT access opportunities for women and youth, the disabled and disadvantaged, particularly disenfranchised and illiterate people, in order to address social inequities.”

In Kenya, Article 54(e) stipulates that a PWD s is entitled; “to access materials and devices to overcome constraints arising from the person’s disability.”

Nonetheless, of course, the reality couldn’t be further from the truth.   In respect to Uganda, efforts to support PWDs to access the much-needed ICT seems to come down to the usual suspects - lack of financial resources and the political will to implement change.  To demonstrate this lack of political will to bring about the much-needed change, CIPESA points at the UCC Act.

Though the law necessitates different TV stations to implement sign language, the government has not cracked a whip on the defaulting TV stations.

“Whereas all television stations are mandated under the law to provide sign language interpreters to their stations, some do not do it (I can single out one big TV station…) but this makes some people be left out,” said a project officer from Uganda National Association of the Deaf (UNAD) who preferred anonymity.

When critically assessed, the report insists that the region’s legal framework aimed at improving lives of PWDs is generic in nature – it doesn’t touch issues concerning PWDs and how easily they can access ICTs.

“The laws and policies on rights of PWDs in Uganda are numerous. We have the Constitution, and other laws which are working. The challenge (legally speaking) is in regard to those laws which deal with ICT and PWDs…”  Laura Kanushu, the executive director of Legal Action for Persons with Disabilities in Uganda, explained.

Even in instances where the technologies are offered, many persons with disabilities, their families and disability service providers, especially in low class, are not aware of the range of accessible ICTs available  and,  to rub salt into the wound,  they simply don’t know how they can be used, the reports says.

“For instance, a secondary school student who used Thunder Speech Reader, the only one to do so among all respondents, disclosed that the chairperson of UNAD was the friend who had given him information about the same. It is noteworthy that there was no direct connection between the UNAD chairperson and the school,” the report says.

Just like Uganda, Tanzania has more or less an identical script; there is a huge disparity been words and action. In 2019, for instance, the Tanzanian government announced plans to recruit 500 specialized teachers of inclusive education to empower pupils and students living with disabilities to realize their academic dreams.

Nevertheless, in the absence of details on how this will be implemented, the report says it remains to be seen whether the plan will be effected more efficiently than previous ones.  Besides, they include shortage of assistive technologies and devices and low levels of skills and knowledge of usage of electronic devices. These affect the degree of access to information, particularly for persons with visual and hearing impairment.

Cosmas William Maduhu, a legal officer who lives with albinism, narrates his personal experience of how being visually impaired limits access to employment. “…this often happens when interviewers for jobs involving use of computers do not take measures to organize user-friendly facilities for persons with disabilities, which ultimately leads to their discrimination and unequal access to opportunities.” Maduhu said.

In terms of action, Kenya could claim bragging rights over its neighbours. Its government has put in place a number of initiatives that are aimed at promoting the inclusion of PWDs to access information and make use of ICT.

The National Development Fund (NDF) for Persons with Disabilities has been in place the past 16 years, the report says.   Ostensibly,    the report says the fund  is  aimed at providing for: assistive devices and services – to improve mobility and access including wheelchairs, crutches, surgical shoes, hearing aid, white cane and others, educational assistance – scholarships for PWDs to pursue education but cannot do so because of financial difficulties, economic empowerment  and revolving fund – help for groups of PWDs to set up small businesses or revolving fund schemes, infrastructure  and equipment – Assistance or social care and education institutions that provide services to PWDs.

Since money is involved, the fund has been riddled with controversies and this catapulted into the dissolution of the board in 2012, having been accused of stealing public funds.   At the time of doing the research, CIPESA says, the board had not been reconstituted.

Embedded in the 2013 jubilee government manifesto was the laptop project.  The idea is or rather was that upon its execution, the project was to ensure that each pupil was to get one laptop.

Six years down the road, the project, which could have aided PWDs access ICTs, seems to have suffered a stillbirth.  According to CIPESA report, the usual suspects are to blame: political interference, corruption, poor oversight, procurement bottlenecks, lack of funds, poverty, laptop security, electricity and rampant impunity.