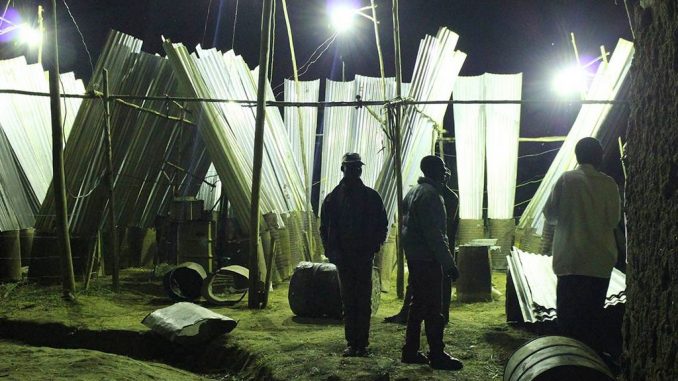 Power distributor Umeme Limited has maintained a Shs 350,000 charge on each fluorescent light bulb used to snare grasshoppers (nsenene) for sale, much to the delight of grasshopper harvesters concerned about profit margins.

The rate has been applying since 2018. Due to increased consumption and use of power to trap the insects, some commercial grasshopper gatherers were worried Umeme might revise the rate for the November to December harvest season.

“We thought they were going to increase the charge,” Quraish Katongole, the chairperson of the Old Masaka Basenene Association Limited, a conglomeration of nsenene trappers, says.

Crunchy roast grasshoppers are popular in central, western and eastern Uganda, and in January 2018, The Observer reported then that half a kilogramme was going for $2.75 (Shs 10,249, going by the Bank of Uganda average US dollar to Uganda Shilling exchange rate of January 2018).

Nsenene are trapped twice a year, that is between April and June and from November to December. They come with the rain that blends with wind. And, like moths, nsenene are attracted to cool bright bulbs.

Therefore, some enterprising Ugandans invest in fluorescent bulbs, drums and iron sheets to trap them. The bulbs they use consume more power than the average filament or light diode bulbs that many households use.

It is for that reason that Umeme requires harvesters to indicate where they will operate from during each season. The power distribution company can then provide a transformer purposely for the grasshopper trappers so that they do not hook onto lines connecting households and consequently destabilise power voltage.

According to John Sembatya, Umeme’s customer service engineer for western Uganda, basing on grasshopper harvesters in Kayirikiti in Masaka, the harvesters use between 30 kilovolt amps (KVA) and 40KVA.

“That is why a 50KVA transformer might not serve the grasshopper harvesters and domestic consumes at the same time,” Sembatya, an engineer, says.

Umeme’s guidelines for grasshopper harvesting say a commercial nsenene gatherer uses a minimum of three bulbs. Other accounts have it that a gatherer will use between three and ten bulbs to attract swarms of grasshoppers.

Lately, the grasshopper business has attracted even more attention. The latest to pick interest in it is the Uganda National Bureau of Standards (UNBS). The bureau says there is need to maintain quality standards. District local governments, too, levy rates on the nsenene traders.

Ugandan should try to value them and use them for tourist attractions.

Watching wild animals in the parks alone without a known national cousin is nothing. Those foreign tourists always want to eat/try the local cousins.

Matooke, millet or cassava don't look too appetizing to any muzungu That is due to luck of culinary creativity/science of the local food. .
Report to administrator
0 #2 Empayippayi 2019-10-13 15:44
Quoting Lysol:

The grasshoppers are dedicates and have high protein .

"Dedicates"? Probably you wanted to say "delicacies".
Report to administrator