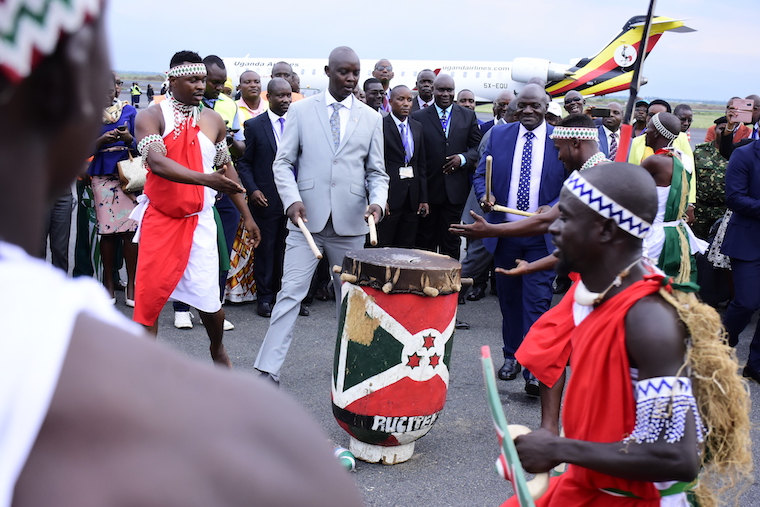 These, according to Pacifique Musongera, an official of the Burundian civil aviation authority, carried 270,000 passengers in and out of Burundi last year.

SN Brussels is the only commercial non-African airline that flies to Bujumbura following the exit of Emirates, Fly Dubai and Qatar Airways about three years ago.

Deo Nyanzi, Uganda Airlines’ sales and marketing manager, told The Observer that their focus is not primarily on Burundi’s small market but building a network to strengthen its hub at Entebbe.

“We are looking at the network of passengers going to any of our destinations because when selling, we don’t sell a single route of Bujumbura – Entebbe. Someone could be travelling to Mogadishu and books our flight from Bujumbura to Entebbe and finally to Mogadishu. It is that network that we are looking at,” Nyanzi said.

From the speeches, it was clear that political considerations overrode economic considerations in adding the Bujumbura route to Uganda Airlines’ network.

Uganda and Burundi were the first countries to contribute troops to the African Union Mission in Somalia (AMISOM) and as the state minister for Works, Gen Katumba Wamala, addressed guests at a brief function in Bujumbura, he suggested to the airline’s board to offer concessions to Burundian troops.

“For Uganda to show appreciation for the contribution of Ugandan and Burundian troops to the pacification of Somalia, Uganda Airlines should give tickets at a [cheaper] rate for [the two countries’] troops,” Wamala said.

The Mogadishu route is one of the airline’s best-performing, and, according to Wamala, the route was prioritised for Uganda to show the world that AMISOM’s intervention had opened Somalia to business. Uganda Airlines commenced commercial flights last month with flights to Nairobi, Juba, Dar-es-Salaam and Mogadishu.

Its route network is expected to expand to other destinations in Southern and Central Africa.

On October 7, the airline expects to receive the remaining two Bombardier CRJ 900 which will be deployed on the planned routes to Kinshasa (DRC), Zanzibar and Kilimanjaro (Tanzania), Asmara (Eritrea), Hargeisa (Somaliland), Lusaka (Zambia), Harare (Zimbabwe), Djibouti and Addis Ababa (Ethiopia).