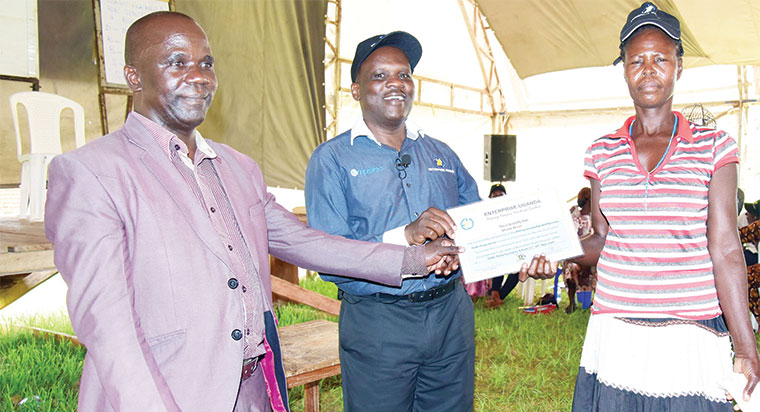 As the third phase of the Northern Uganda Social Action Fund (Nusaf III) makes forward steps into mitigating household poverty among communities where the project operates, the process is encountering diversionary political forces convincing beneficiaries that the funds are donations seeking to spur political support.

According to Charles Muswa, the Nusaf III desk officer for Kapchorwa, political interference of the same nature is detrimental to the operation and impact of the funds disbursed, to an extent that the community revolving funding is suffering constrained recovery rates.

He noted that recovery is challenging because opportunists are making political capital out of the funding, for that matter, beneficiaries perceive the money as rewards, and not supposed to be paid back. He cautioned people to ignore such political moves for the funds are not rewards and there is no politics attached to the money.

“The revolving funds we get from Nusaf III are supposed to be utilized in form of soft loans, groups receive the funds and use them for enterprise development, the money is supposed to be periodically recovered from such groups so that it goes to more other target groups, but because of political interference, the recovery rate now stands at 60 per cent, below the target of 80 per cent,” he noted.

He was speaking at Nebbi Town SS last week during the Enterprise Uganda-facilitated Enterprise Startup Tools Training to equip beneficiary groups of the Sustainable Livelihoods Pilot (SLP) project with skills in entrepreneurship to take advantage of the market forces of demand and supply to enable them grow, sustain and diversify their enterprises and earn income regularly.

Charles Ocici, the Enterprise Uganda executive director, said that political interference needs to be countered with strong public awareness moves, spreading information that the funds have no political inclinations whatsoever and should be carefully handled with a positively changed mindset focused on the spirit establishing and developing income-generating ventures.

“We need to categorically clear the air that SLP funds are from Nusaf III and development-oriented partners like the government of Japan,” he said

SLP is a component project funded and implemented under Nusaf III with support from the Japanese Social Development Fund. It targets already existing Nusaf savings and business groups in the nine districts of Kitgum, Gulu, Pakwach, Lira, Masindi, Kotido, Soroti, Butaleja and Kapchorwa to provide additional investment capital through a Village Revolving Fund.