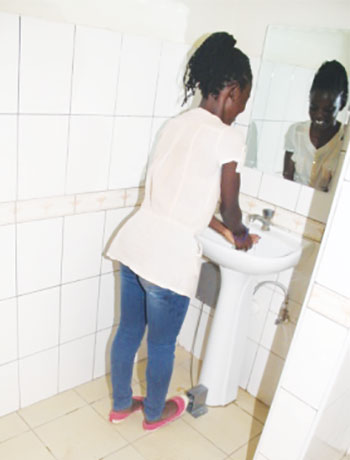 A girl uses a tap with a pedal

Lubowa township in Wakiso district is where Grace Nakibaale, a 29-year-old architecture graduate from Makerere University, has established her base, making pedal taps.

As the name suggests, these are water taps that use a pedal to release water just the way some dustbins are opened, to prevent communicable diseases that can be spread through contact with hand-operated taps.

Nakibaale says her innovation was inspired by the world’s biggest outbreak of Ebola in West Africa a few years ago and the fact that her mother is a clinical officer at Entebbe International Airport; she felt that people from countries with the epidemic could easily infect her mother and other people in such places.

She thus thought of how to contribute towards preventing such infections leading to the birth of the pedal tap.

“The Ebola outbreak made me appreciate that people in public places using public water sources are at risk because if a person suffering from say Ebola uses a hand-held tap, the virus can easily be transmitted to all other people who get in contact with that tap,” she says adding that because as a country we cannot afford sensor-driven taps, a cost-effective, easy-to-use system like pedals would reduce water wastage and control infections.

The pedal tap only needs the feet to release water without touching the faucet. However, to be safer, it is advisable that one wears shoes or sandals to avoid getting in physical contact with the pedals that may be contaminated.

Her first functioning pedal tap was produced in 2016, a year after conceiving the idea but she has since gone on to produce more than 40 taps with the ability to produce as many as possible, depending on the available demand.

“We can supply as many taps as needed to satisfy the available demand, but the orders are not yet very many since the initiative is still new to the Ugandan populace,” Nakibaale adds.

However, to increase public awareness together with her team of six, they are introducing media campaigns through their website and other media outlets to promote the product.

“Once these taps are fully adopted in public places, the rate of infectious diseases spread by taps will reduce greatly and the dream of finding solutions affecting my community will be fulfilled,” she says.

Apart from being a professional architect, Nakibaale has the desire to find solutions to problems in the community whether in her line of profession or not.

“I want to always look at the challenges in communities and come out with lasting solutions. In future, I want to be remembered as a person who championed infections disease control and prevention by innovating pedal taps.”

The product has helped her forge a career as an innovator, job creator, mentor and increased her knowledge beyond classroom education. She has travelled to different places and won many innovation awards both locally and internationally.

Her awards include the Johnson and Johnson Inc award, University of California Berkeley award, Big Ideas Competition award, and Youth Spark Innovation award, among others. The innovation was supported by Resilient Africa Network under Makerere University School of Public Health.

Prof William Bazeyo, chief of party, Resilient Africa Network, says the organisation supported Nakibaale upon realisation that the innovation would greatly impact on the community in preventing communicable diseases.

Prof Bazeyo calls upon all the young people with innovative ideas to visit their offices in Kololo for both advice and financial support as long as their ideas are viable.

0 #1 Jama 2019-06-06 18:14
A good initiative professor .Continue to support these extraordinary brains,which are ignored by the state.

Congratulations to our pedal tap inventor.
Report to administrator