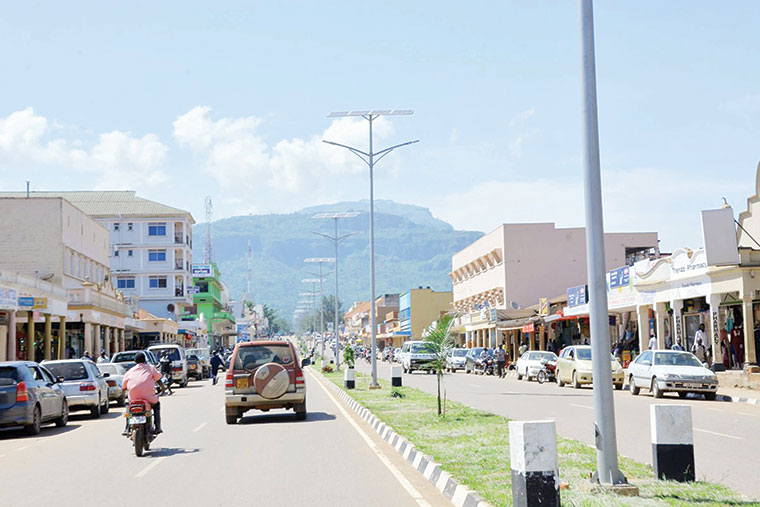 A street in Mbale town, which is on course to regain its former glory

A few months ago I travelled to Mbale town and realized that the dust and potholes that were the norm had been replaced with asphalt roads complete with well-paved walkways.

I was impressed with some streets, which even have street lights and garbage disposal units. I saw some residents who were mesmerized by traffic lights. Mbale and Mbarara are the first towns outside Kampala to have junctions with traffic lights.

These roads are a result of the Urban Support to Municipal Infrastructure Development (USMID), a ministry of Lands, Housing and Urban Development programme with support from the World Bank. The program saw a total of 14 municipalities countrywide get infrastructure upgrades that enable them to grow economically.

Although most municipalities chose roads, others went for markets, bus parks or just gardens like in Lira where Coronation Park is now one of the most sought-out venues for events. These are actually the roads the president has been commissioning in Hoima, Lira and Arua over the past week. One thing I liked about USMID is actually not the roads, markets or bus parks they built but, rather, the empowerment they extended to these municipalities.

For example, I have been told that they didn’t dictate which road to build or which market deserved a new structure. Municipalities made the call and chose which contractor was best suited to deliver the job. In about two municipalities, a contractor was chased away because of failure to deliver and contracts retendered. Municipalities knew that if they did shoddy work, they would miss out in the next round of funding.

So, there was less interest in contracting briefcase companies in order for officers to ‘eat’ the money. Hoima went for a high-tech construction materials lab so that if you want to test the strength of building blocks, you wouldn’t have to travel to Kampala while all of the 14 municipalities received equipment for urban planning and environmental protection.

Municipalities because of updates in infrastructure have reportedly increased their revenues from street parking and rental fees in markets and bus parks, among others. Because of street solar lights, businesses now open for longer hours and more jobs have been created.

Apparently even street workers are happy — customers can easily notice them! In Gulu, plots of land, which were going for a song, now cost as much as in some parts of Kampala. However, as municipalities are happy with the infrastructure, I hope they will be able to maintain them. A lot of Ugandans prefer repairs over maintenance. Roads must rot first, become impassable and communities strike before anything is done. If it is not a crisis, we do nothing.

As USMID enters its next phase, I hope municipalities around Kampala will be considered. The road from Kira via Najjeera to Kiwatule has unbelievable traffic jam mainly caused by a stretch of less than 100 metres that has been allowed to rot. Government officials are happy to push other road users off this stretch by their ‘sharp shooters’ but do nothing about it.

Other people including ironically policymakers spend hours in this traffic jam instead of fixing this stretch. Municipal officers use the road everyday and see it but do nothing. The road users are happy to roll up the windows, turn on the air conditioning, pull out their oversized smartphones and catch up with friends or whatever.

The impatient ones are happy to silence their children who ask them why they are driving on the wrong side of the road as they rush them to school. I can say that about most roads leading to Kampala. I thought that maintenance is cheaper than constructing a road that is completely impassable.

Until probably oil starts flowing in western Uganda, Uganda’s economy will continue to depend on Kampala and its surrounding areas. We have created municipalities around Kampala such as Kira and Nansana and then left them on their own. Some have offices in dingy places with the hungriest staff you will ever find. Apart from having representatives in parliament and having a municipal council, they are still as they were before — broke and unable to do anything.

USMID should include them in their next plans so that they are able to fix the most important roads in greater Kampala. The officers should also be trained in urban planning so that they can really plan for an expanding Kampala. We need municipal councils that can plan for at least 50 years and be able to implement policies that will stand the test of time.

And municipal officers should consider roads not just in communities where they have apartments but, rather, which ones make more sense economically or move traffic faster.

+1 #1 zzungulu zungulu 2019-05-24 14:29
Because of the stringent demand for accountability and hope for more funding set by the World Bank, we would not have managed to reach were we are with our Ugandan attitude of "for my stomach first", we pray that Ugandans start demanding for integrity vetting of its public officials on a yearly basis in order to realize quality service and products.
Report to administrator