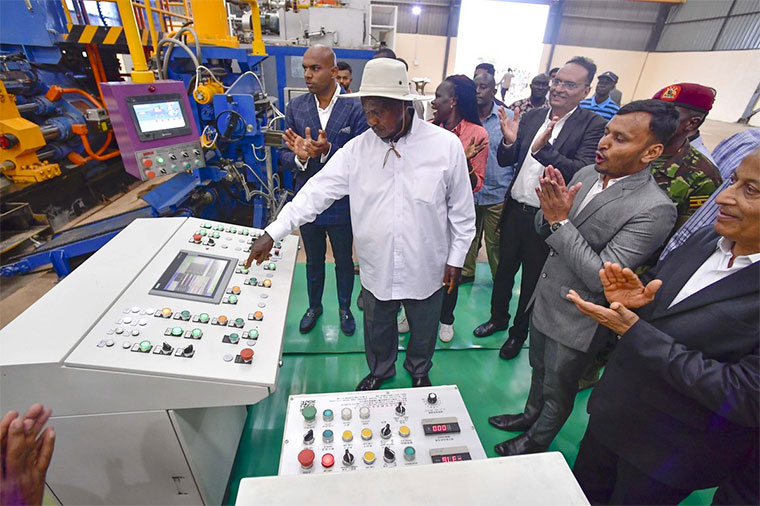 Of late, President Museveni is traversing the country launching one factory after another.

In one day last week, he opened 10 of them promising to create thousands of jobs. For a population and economy as young as Uganda’s, factories are a good thing and the majority of Ugandans with their basic education can easily be skilled to perform the routine jobs that are the norm in factories. Uganda is strategically located to service the growing populations in Africa’s Great Lakes region.

During the same week, I was travelling from Jinja in the early evening and upon reaching Mukono, I started noticing a lot of people walking by the roadside. Since Ugandan roads have no lights and I was seated in the back of a van with blackened windows, I initially mistook these people to be students returning from school until I was informed that they were factory workers either retiring home after their shifts or reporting to work for night duty. The walking class looked every inch indigenous Ugandans.

In retrospect, I noticed something when the factory launch stories were splashed all over the newspapers. Almost all the owners of these new factories launched last week were foreign. They spotted a market here and went about starting exploiting it.

The question is: why aren’t Ugandans opening factories? Are we only happy to be the walking class like I saw in Mukono? Knowing our unemployment levels, the factory owners will not pay so much because one worker can easily be replaced by another.

Yet when you drive around greater Kampala, you will see a lot of properties going up — some the size of shopping malls doting the hills that make up our terrain. Most of these ‘shopping malls’ are actually residential houses for the Ugandan elite. The elite usually give birth to a few children but are happy to build houses that stretch as far as your eyes can go.

When they aren’t building these ‘shopping malls’, they are putting up apartments whose returns are very low. The foreigners seem to be less interested in such houses and concentrate more on factories and trading that offer better returns. When you see a foreigner in Uganda putting up apartment blocks, you know that they are just constructing them to sell them to Ugandans.

A foreigner who comes here with less than a million dollars within a few years is so rich yet most Ugandans with the same capital base are chasing one tenant after another or have built ‘shopping malls’ in their villages of birth where they spend less than 10 nights each year.

Some say they build these houses because in case they die, the mourners will praise them as having built decent homes! A factory in your village will still give you the oomph that you think your dead body needs during the burial ceremony.

If Ugandans leave factory ownership to foreigners, they will eventually be excluded from the economy and become only happy to be among the walking class for night shifts. A clever politician will surface one day and start promising Ugandans that once elected, he will nationalize the factories. We have been on this road before and we know the consequences. Did we learn anything? The time for Ugandans to get involved in setting up factories is now so that they have a say in their economy.

This requires a mindset change from rentals to factories and other businesses that will enable us take full charge of our economy. One of the reasons Ugandan businesses don’t grow is actually properties. Once one makes some money, the next thing they are doing is building rentals instead of manufacturing what they have been importing to create more jobs and make much more money.

The lenders need to follow that route too by funding ideas instead of always looking for high-end properties as collateral. If somebody came up with a brilliant idea that is well researched, the lenders should be able to fund it by either becoming equity partners or ensuring that the money released is not diverted into marrying another wife or buying a fancy car.

This means there is need for Ugandan entrepreneurs to professionalize their businesses by institutionalizing corporate governance structures that they themselves respect if they are to create legacy factories that stand the test of time.