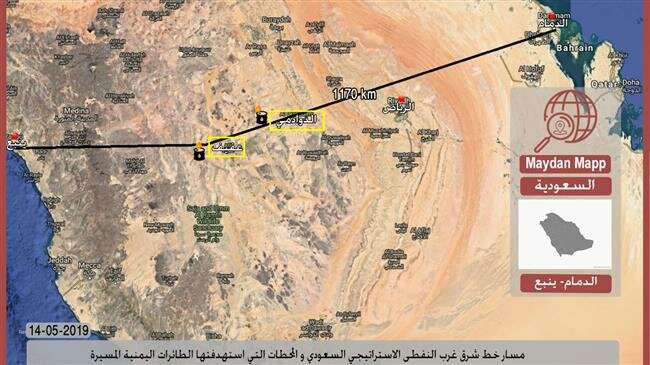 The map shows two of pumping stations on the East-West pipeline route in Saudi Arabia, which were targeted in Yemen’s retaliatory raids on May 14,

Saudi Arabia says an oil pipeline was attacked by drones Tuesday west of the capital, Riyadh.

Yemeni Houthi rebels claimed responsibility for the attacks amid rising tensions in the Middle East. The rebels said they fired seven drones against vital targets in Saudi Arabia, which borders Yemen to the north. Saudi Arabia has launched almost daily airstrikes against the rebels and their allies since a war between the two sides began in March 2015.

The government-controlled oil company Saudi Aramco said the drone strikes caused minor damage and that it temporarily closed the pipeline as a precaution. Saudi Energy Minister Khalid al-Falih vowed the production and export of Saudi oil would not be interrupted.

Houthi spokesman Mohammed Abdel-Salam said Tuesday the strikes are a clear message to the Saudi Kingdom. "Stop your aggression," he said.

Al-Falih said the attacks reaffirm the need for the global community to confront groups like the Houthis. The strikes demonstrated the increased risks in the Middle East, a region that is vital to world energy supplies.

Tensions heightened following the Trump administration's withdrawal from the 2015 nuclear pact between Iran and world powers and the reimposition of U.S. sanctions to weaken Iran's economy.