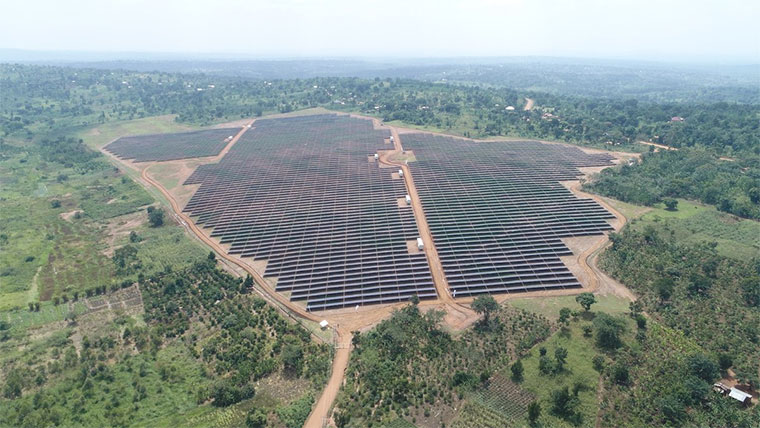 After delivering a 20MW solar project in Gomba, Dr David Alobo says he can power every Uganda in a self-financing scheme. It definitely won’t be an easy stroll, writes Alon Mwesigwa.

Dr Alobo’s plan is ambitious. As heavy rain pounded Kabulasoke in Gomba district last Wednesday, he made the most optimistic pitch.

“All Ugandans can have power within eight years,” he said as President Museveni, who was chief guest at the commissioning of a 20MW solar power project in Gomba, watched quietly. “Solar power can do to Uganda and Africa what mobile phone technology has done for the communications industry.”

Dr Alobo is the CEO of Mss Xsabo group, the firm that spearheaded the installation of the solar project, which cost $24.5m (Shs 92bn) and is the biggest in east and central Africa. The heavy rain was perhaps symbolic of how hard to fulfill his suggestion is – akin to chasing a unicorn across the horizon.

But Alobo asserted: “The Xsabo group has actually prepared a blueprint for self-financing power for all solutions that would provide affordable power to all households, schools, hospitals…we would be glad to share this blueprint in a meeting with Your Excellence at your convenience.”

Dr Alobo worked with Humphrey Kariuki, the chairman of Janus Continental Group, the parent firm of Great Lakes Energy Company, which is based in the Netherlands. Power from the solar project in Gomba has been added to national grid. Uganda Electricity Transmission Company Limited, the buyer of bulk power in Uganda, and power distributor Umeme will work on the modalities to connect locals in Gomba from the national grid.

“We will work with UETCL and Umeme and make sure local people are connected for free,” Alobo told journalists on the sidelines.

Mss Xsabo’s journey has not been easy. Facing doubts over its financial health, the company has managed to go through shareholder disputes and borrowed time to get regulatory approval for its project to take off.

At the start, Mss Xsabo wanted to put up a 100MW solar project and 150MW wind power farm. However, there were doubts about its financial capacity considering that each wind mast costs anywhere between $400,000 and $500,000, and there is need for a couple of them.

According to Alobo’s investment plan, he was to lease the equipment and pay for it using the money that the Uganda Electricity Transmission Company Limited would pay him by buying the power.

Nevertheless, the authority shot down Mss Xsabo’s proposal because it was quite ambitious. He was advised to knock down the size of both projects to 20MW each. Government asked Alobo to deposit performance bonds for the projects.

Over the years, Mss Xsabo defaulted on these financial commitments up to the point where the license for the wind power project was revoked. It was left with only the solar power license.

Being a Ugandan, and with government trying to promote local investors, Alobo managed to buy time. In 2015, he did the ground-breaking of the solar project in Gomba. Vice President Ssekandi was there. But it took years for the mobilization of staff and equipment to get to the site.

The company also changed partners and shareholders. First there was a partner called Outterridge Services from Mauritius that left the company. Mss Xsabo accused Outteridge of failing to meet its contractual obligations under the Engineering, Procurement and Construction agreement it had signed with it.

Another company called Greencells was drafted in to replace Outterridge Services. That didn’t work out either. All those troubles now appear to be in the past.

Just over 20 per cent of Ugandans have access to electricity, combined solar and national grid, according to official government data. Connecting everyone would be a tall order, which means everyone’s income must be boosted to be able to pay for the power.

Dr Alobo, a management consultant who has consulted for elite firms like carmaker BMW, doesn’t control those setting power tariffs; that responsibility is vested with the Electricity Regulatory Authority. Power is expensive with ordinary domestic consumers paying at least Shs 760 per unit kilowatt per hour.

The Gomba project coming on board will not necessarily cut costs. At least 50,000 households will be powered in Gomba and neighbouring districts but few can sustainably pay for power.

Xsabo Group itself will sell its power to government at 11 US cents, a higher figure that the president attempted to renegotiate while touring the area. Apparently, he told investors that the cost should at least come to 8 US cents a unit kilowatt per hour.

“But we will take the negotiations slowly,” Museveni told optimistic locals.

Another challenge will be from government bureaucracy. In his speech, Dr Alobo said he hopes “nobody inside and outside government and its regulatory organs will frustrate us again this time as it happened much too often in the past.”

“We never paid bribes and that is why our project delayed,” Alobo told reporters after. “In one office in Kampala, our documents just disappeared.”

In Gomba, there were land issues, which are likely to replicate in other areas. Dr Alobo told reporters that one piece of land was claimed by a host of family members, forcing the company to pay more than twice. The issue is in court.

ONE OF THE FIVE

The Gomba project is one of the five lined up to make 150MW of solar power that the company intends to install in Uganda.

“The word pilot in our license indicates, for us as a project, this is just the beginning.  The documented understanding with Electricity Regulatory Authority is that we may move to the next site after completion of at least 70 per cent of the pilot solar power plant…but we completed this 100 per cent,” Alobo said.

Xsabo intends to spend $200m in Uganda when it starts new projects in Nkonge, Mubende (50MW), Soroti (50MW), Lira (10MW), and Kasese (20MW) take shape. This will total up to 150MW. The next project starts in April in Nkonge in Mubende, where the firm has already bought land.

This year, government will commission Karuma (600MW) and Isimba (183MW) power projects and the country will have more than 1,000MW of installed capacity. With this excess power, government is expected to negotiate further with investors like Alobo to bring their charges down.

On the financing, Alobo said: “We are a hot cake now. That’s why you see all the banks here.” He indicated that initially banks didn’t want to give them money but after successfully completing the Gomba project, the banks are happy to work with them.

President Museveni applauded the project: “[Dr Alobo] is a noble man who has chosen not to stay in his comfort in Germany but decided to come back to his country to change lives and the economy.”

It is unfortunate that the wind power project has failed. Some African leaders want to play politics with such essential projects in a modern state.

That is why there used be real funds from the East African Union concerning such regional infrastructures.

These funds used to help out member countries in formulating regional transport motorways, airways, harbours, energy, telecommunications and any modern infrastructure that African countries had to acquire whether these African countries were very poor, poor or very rich.

It was clear that if these ambitious temporary leaders left, such projects continued to get on without any unnecessary political interference.
Report to administrator
0 #2 kabayekka 2019-01-21 22:42
One is of the opinion that if this solar company tries its wind proposals into Kenya and Tanzania right on the coastal perimeters of the great Indian Ocean, there is hope for Africa never again to suffer lack of electrical energy in 60 or 70 years time.

That sort of money is peanuts if Africa wants an environmentally friendly energy for its future. One is of the hope that soon and not later green forests will start to recover on this great continent.
Report to administrator
0 #3 kabayekka 2019-01-25 03:25
Interesting indeed that it was raining when these elites were opening up the solar project in hot tropical Africa.

That means that the solar panels are not taking in solar energy. Not to worry because rain stops suddenly for the strong sun to proceed.

But then countries in the temperate climate have already invested heavily in wind energy and right now in winter as they suffer solar energy loss some of these countries have thousands of windmills rolling with renewable energy wind power.
Report to administrator