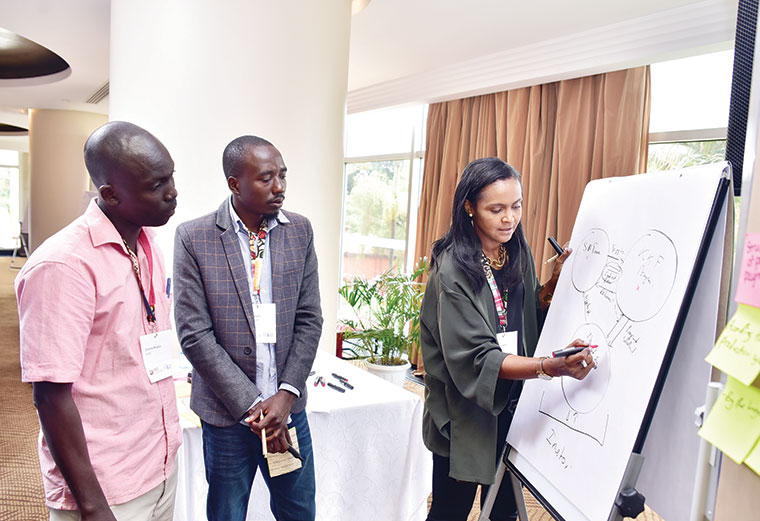 The Supporting Entrepreneurs for Environment and Development (SEED), a global partnership for action on sustainable development and the green economy, is spearheading the drive to impart technical and entrepreneurial support to farmers in order to realize their full potential, writes BAKER BATTE LULE.

Mid this year, maize farmers across the country groaned in anger after the price of maize plummeted to an all-time low of less than Shs 200 a kilogram, something that prompted government to intervene by decreeing that farmers shouldn’t sell their product below Shs 500.

In contrast, two years earlier in 2016 and 2017, the price of maize was so high that some farmers dealing in poultry and animal husbandry – fields that depends on maize products – had to sell their animals and birds owing to the very high prices of maize that at one point reached Shs 1,500.

The new entrant to the list of catalysts of price fluctuations is climate change that has led to instabilities in seasons. Farmers who greatly depend on weather for agriculture are adversely hit by the unpredictability of seasons, especially when the dry season takes longer than expected. It is for instabilities like this that organizations with bias in agriculture want to see stability in the sector that has increasingly become critical especially with the rapidly growing population.

That is why SEED says in order to avert environmental degradation and tackle social problems, there is need to support farmers realize their full potential in agriculture.

On top of supporting agriculture, the organization focuses on promoting entrepreneurship among farmers such that even when the agriculture has been badly hit by changes in the climate, their livelihoods are not affected a lot.

Despite the fact that Uganda has got a number of companies that offer insurance services to people, not many of them are willing to extend cover to farmers yet they make up the bulk of Uganda’s population. Banks and insurance companies regard agriculture as very risky and, therefore, are unwilling to bet their money on it. Realizing this, SEED thought about a model that would cover this deficiency.

According to Daniel Ninsiima, an official with SEED, also managing director of a company called Omulimisa that deals with agriculture, says that the mobile insurance is the first of its kind in Uganda.

“We believe that agriculture is way too important to be left to the devices of the farmers. When there is a problem with bad yields, not only the farmer gets affected but all of us who consume their products,” Ninsiima said.

Ninsiima says farmers who embrace this product get a general insurance cover which is calculated by computing the expected yields from the crops in a given period. The money is then paid through mobile money as the organisation has a partnership with telecom companies MTN and Airtel.

“The company, using its satellite data, determines that in a particular season the weather was not favorable and indeed it was the reason the farmer lost in the expected outcome. We then base on that to compensate the farmer,” Ninsiima says.

He adds that the insurance policy is also fused with the one million dollar agricultural loan which the organisation has invested in the program. This program has been rolled out mainly in Northern Uganda because of its communal land ownership system that doesn’t allow land fragmentation like it is in other parts of the country.

“This policy covers only risks associated with climate change and seasonal crops like sunflower, sorghum, maize, millet and simsim that are easy to compute,” Ninsiima said.

On top of providing insurance cover, the program also helps farmers acquire market for their products so that they are able to keep in business and also manage to acquire more comprehensive insurance policies.

“The organization ensures flexible payment to farmers as the policy has small premiums but assured payment. In the process, we also give back to the community through employment to people who work as agents to sensitize farmers about the policy,” Ninsiima said.

Other than insurance cover for farmers, SEED also has got another product called Irrigation system micro-leasing for high-value crops whose aim is to mitigate risks in agribusiness and improve climate.

Eddie Sembatya, an official at SEED in charge of the program, says farmers under this product are given free solar agricultural equipment such as irrigation equipment on a loan basis payable in a period of two years.

“The reason for dealing with high-value crops, for example hot pepper, is that they yield a lot of money and at the same time they can be grown on a small piece of land but grow in a very short period which can be easily facilitated by this portable solar system,” Sembatya says.

This product has already been introduced in most of the districts especially those with easy access to water sources. Like with farmers of seasonal crops, SEED also helps these farmers to find markets for their products to help them offset the loans.

“So far more than 5,000 farmers have acquired these machines and a big percentage has even paid back their loans. This is even easy because many of these loans are issued to farmer groups not individuals,” Sembatya says.

The organisation also provides technicians to farmers to fix their machines in the event that they break down.

“These interventions are game changer at a time when everybody is crying about climate change. We believe they will go a long way in alleviating some of the major problems bedeviling the agriculture sector.”