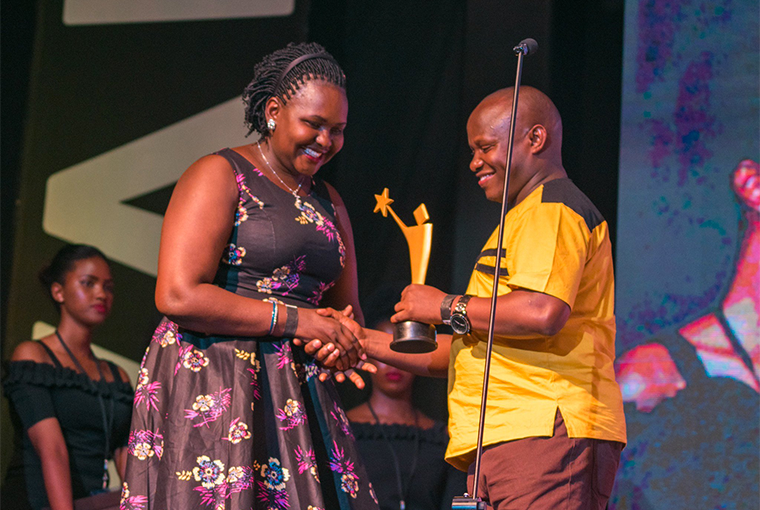 At just 35 years, JOYCE PATRICIA OKWIR is inspiring ability among persons with disabilities (PWDs). Having grown up in war-torn northern Uganda, she has been at the centre of advocacy for PWDs through job opportunities as well as creating a platform for them to showcase talents, writes Moses Mugalu.

A war is always a tough time. It devastates lives of the people affected by it in many ways. It is a strong barricade against development, leaving a previously well-built community infrastructure in rubble, claims many lives, and leaves scores injured; both physically and emotionally.

In a previously war-torn region, the numbers of people with disabilities are higher. This, capped with post-war consequences such as depression and poverty, contributes to several children being born with disabilities.

Knowing that resources and opportunities for employment are greatly reduced by the war, youth with disabilities are greatly sidelined, but thanks to people like Okwir, the narrative is changing.

Much as the war ended in 2004, the high competition for resources saw many youth with disabilities miss out on school and job openings, with the situation not being helped by the high degree of outright stigma against disability by the community.

In fact, it was even worse for people with visual impairment, and survivors of nodding disease syndrome who are now battling multiple physical, emotional and psychological challenges.

Okwir decided to see the situation differently. “Disability is part of our diversity. A society with PWDs is who we truly are. This is our reality. It’s up to us to choose to interpret it as an unpleasant reality, or what it really is, a beautiful one,” she says. “They (PWDs) are bright, talented but our society is not equipped to promote them.”

As a young girl, she saw first-hand the effects of the LRA war although she was fortunate to steer clear of danger. Most importantly, that experience prepared her to not only embrace PWDs but also empower them.

While going about her studies at university, Okwir would later meet a Danish national with deaf blindness, who owned a craft company back in his country that employed many people, including able-bodied ones.

She felt bitterness towards her own community for not providing a similar environment for PWDs to thrive; so, she immediately started pondering how the many young people with disability could access this kind of empowerment.

Riding on the passion to share her very own being for the blessing of others, Okwir headed out into disability inclusion advocacy, achieving employment with the National Union of Disabled Persons of Uganda (NUDIPU), an umbrella NGO that brings together various categories of persons with disabilities including those with physical, mental and sensory impairments. Her role involved monitoring the progress of children with disabilities.

“I joined NUDIPU with an open heart to learn and care for PWDs. I saw how they are discriminated in various forms of life and I didn’t like it,” she says.

In the early 2000s, some parents would ask her if she had a place for keeping children with disabilities so that she could take care of them as her own. She met many youth living with disabilities who had lost hope, had low self-esteem and total disbelief in how their community treated them.

With such challenges and expectations, she took it upon herself to intensively engage with the community, parents and leaders at different levels for them to see persons with disabilities as having abilities and talents and to treat them as equal.

“Their [PWDs] talents are not explored because they spend quite a lot of time feeling self-pity,” she says.

Because of her dedication over the last decade and a half, she has mentored and coached 179 youth with disabilities in Pader, Agago and Nwoya districts so far, who have started their own businesses and a few of these young entrepreneurs  have gone beyond self and are employing other youths.

“Working and seeing how successful they are, further motivates me to raise their plight in society through creating opportunities for them,” she says.

Okwir currently works as the project manager for land security and economic development with ZOA Uganda, where she has cultivated disability inclusion and mindset change; from the ZOA that considered PWDs hard to deal with to one with as many as five projects that include PWDs in one project area.

Many of the staff are now disability-aware, thanks to her advocacy with patience and wisdom. To add a Cinderella ending to her tale, ZOA is also one of the model organisations in Light For The World’s Make 12.4 per cent Work Initiative.

The initiative seeks to provide better employment opportunities and conditions for the 12.4 per cent, the population of Ugandans with disabilities as of the 2014 population census.

In August, Joyce Patricia Okwir won the 2018 Young Achievers Heroine award in recognition for her selfless grassroots service in promoting disability inclusion and truly practicing the concept of ‘leaving no one behind.’

Most of all, she was recognised for serving as a role model and an inspiration.