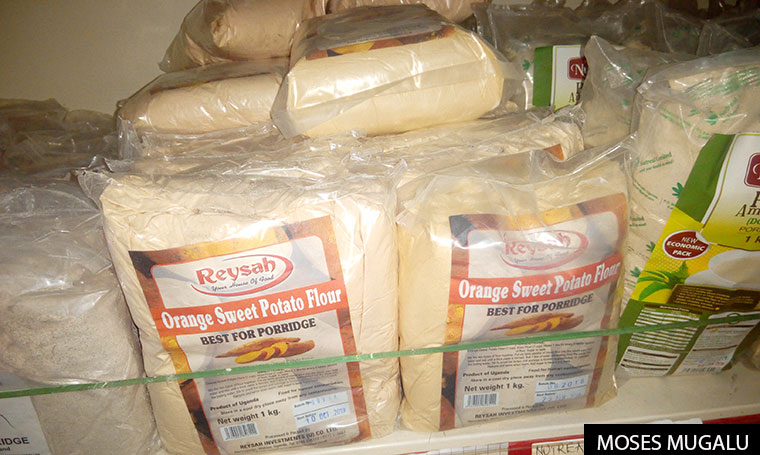 Potato porridge is rich in Vitamin A

Carol Komujuni, a local entrepreneur at the Kira-based Namugongo Millers Ltd is the brain behind the multipurpose flour. She added value to the potatoes, coming off with at least three by-products - OSP flour; which is multipurpose pure orange sweet potato flour that can used for making porridge and baking, as well as the mixed products (OSP Millet and OSP Soya Rice) for making porridge.

Health experts and nutrition campaigners recommend orange sweet potatoes for mothers and children due to the rich vitamin A and iron content in them. They also boost immunity in both children and adults. HarvestPlus, a non-government organisation, has since 2017 supported Komujuni to process the potatoes into flour.

A pack of 1kg OSP flour and the mixed OSP products costs Shs 6,000. Last week, with support from HarvestPlus, Komujuni rolled out a promotional campaign for the products at Ntinda-based Capital Shoppers and Tuskys supermarkets.

“The customer response has been overwhelming and very positive,” Komujuni said in an interview on Saturday, September 15.

She supplies an average of 3,000 kilograms every month. She also gets special orders from higher institutions of learning such as Makerere University.

In 2017, while looking for partners to process orange sweet potatoes into flour, HarvestPlus chanced on Komujuni at Namugongo Millers. She worked at the milling facility as an accountant but on listening to the proposal from HarvestPlus, Komujuni decided to invest in it. She would take advantage of the machines at company, which was already milling other flours from millet, maize and soya.

HarvestPlus gave her two solar dryers for drying orange sweet potato chips before milling in order to get good quality flour. The NGO also offered to brand and market her products. Since then HarvestPlus has provided publicity for her flour especially at nutrition exhibitions.

It was during such exhibitions that Komujuni’s products caught the attention of giant retailers such as Capital Shoppers and Tuskys. They agreed to stock her products and also work together to promote the nutritious flour.

Having started out as a pilot scheme, Komujuni relied on her small garden to provide the potatoes as raw material and it was enough for the first six months. However, with increased demand for the products, she has had to tap into HarvestPlus’ countrywide network of farmers, who grow the potatoes.

Apart from the burden of transporting the potatoes to her Kira-based factory, Komujuni incurs losses because potatoes ferment quickly and rot away. It would require specialized vehicles to transport them from long distances but she cannot afford them at the moment.

She also decries the scarcity of potatoes during prolonged dry seasons.

“You end up buying from as far as Karamoja, Soroti and Kabale from where the cost of transport is very high,” she explains.

However, she plans to employ more permanent workers once she acquires bigger driers to expand her business in the near future.

“I want to have my products in all supermarkets in Uganda and even abroad,” she says.

She adds that selling potato flour has not only boosted her personal income but earned her numerous trips abroad and met many respected people. Jude Asiimwe, marketing and product development specialist at HarvestPlus, says Komujuni is one of model entrepreneurs they are supporting to add value to the orange sweet potatoes.

“We want strengthen this value chain and promote businesses so that Ugandan bakeries can start using OSP flour instead of imported wheat,” Asiimwe says, adding that more farmers could directly gain from the arrangement.