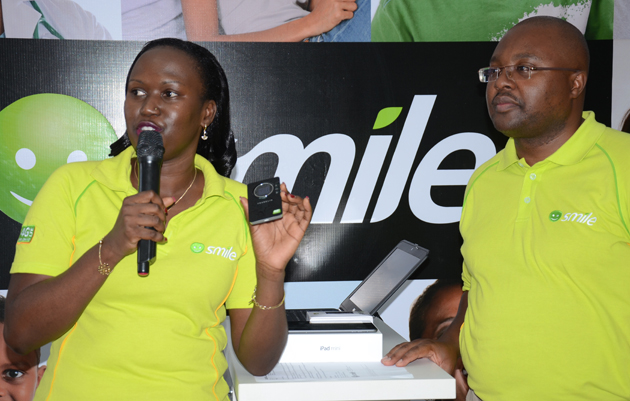 “We have finally arrived,” declares Okiror, seated in his crafts shop at Nalubega plaza, off Bombo road.

“All these others, I don’t even understand what they have been giving us. I can now do anything faster and easier,” he said.

Okiror, who has just fallen in love with Smile telecom’s services, feels the quality of data services of the other providers falls short of what Smile offers. Also a web designer, Okiror recently acquired Smile telecom’s Wi-Fi handset at Shs 240,000, which comes with an internet package of 5GB. He says he hasn’t been disappointed. Thereafter, customers will be able to buy 1GB at Shs 37,500.

“I work with the internet. I meet my clients online. I tell you Smile has made it for me,” he says.

Not until recently, Smile telecom was hardly heard of. Any discussion about internet services revolved around the big four players - MTN, Orange Uganda, Airtel and utl. But these days Smile telecom is very much part of the picture thanks to its aggressive marketing campaign and, what users say, reliable internet service.

When it opened shop here in 2009, Smile was offering both data and voice services. The company, however, failed to break into the voice market, where a cutthroat competition on prices and the huge cost of putting up telecom infrastructure were raging high. A subsidiary of Smile Holdings Ltd of Saudi Arabia, Smile then specialised in data alone. It is turning out to be a wise choice.

The company launched its 4G LTE (Long-Term Evolution) early last year, slowly capturing the market. 4G LTE is an acronym for the wireless communication technology that sends both high speeds of data and voice.

Smile’s internet service, Oboth adds, now covers Kampala, Wakiso, Entebbe, and Mukono areas. Additional coverage is to be rolled out across Uganda in a phased approach over the next five years, Oboth further explains.

With Facebook, Twitter, Skype or WhatsApp becoming part of people’s lives and others entirely depending on the internet to earn a living, a telecom that not only promises but also delivers reliable internet connectivity is godsend. Frustrated organisations often shift from one internet provider to another due to unreliable internet services in Uganda.

Smile telecom promises to be different, but industry observers remain cautious. IT consultant Michael Niyitegeka thinks that maintaining its fast internet will depend entirely on the investments the company will make over time to rhyme with the demand.

“Smile is now predominantly in town. Their internet is good but we need to see this continue even when they roll out to other parts of the country,” Niyitegeka said.

Niyitegeka is optimistic, however, that since Smile is providing data services only, it could be an advantage over the others juggling both data and voice services.

“Any telecom that has both voice and data will have to struggle at some point to have fast internet [service],” he says.

“They basically use the same infrastructure,” Niyitegeka explains, “and the voice guys will definitely eat into the capacity of those using data.”

Smile is currently running a promotion, dishing out ipads and other items to boost its client base. Large billboards promising faster internet now hang in many places along major streets in the city as the company bids to win a fair share of the data market.

History, however, shows that the more customers shift to a telecom network the slower their services become. Figures from Uganda Communications Commission (UCC) for August 2013 indicate that 2.7 million people have subscribed for mobile internet (accessed through mobile phones). Only 98,334 are registered for fixed internet.

It is a question of time before we know whether Smile telecom can keep hold of its clients, and attract more. For now, the company appears to be doing quite well and giving the other bigger players a good run for their money.