Foxtail millet yields up to two tonnes per acre, is drought tolerant and matures in only 75 days, writes EDWARD SSEKIKA.

“I used to grow our local [finger] millet. But this Chinese one is better,” narrates Robert Agony, a resident of Barcal village, Aber sub-county in Oyam district.

Agony is just one of hundreds of farmers who have abandoned the local finger millet in preference to foxtail millet – a Chinese millet breed introduced recently.

Agony says every farmer’s prayer is a good harvest and the Chinese millet gives him exactly that. “The local finger millet takes between three and four months to mature. But this millet [foxtail millet] matures in just 75 days,” he explains.

Introduced in Uganda a few years back by Chinese and Ugandan scientists, foxtail millet was pioneered in northern Uganda in 2016. Agony was introduced to the foxtail millet by Initiatives for Community Empowerment and Support (ICES) – a Lira-based civil society organization (CSO).

He narrates that in 2016, he received 800 grams of foxtail millet seeds from ICES which he planted. After two-and-half months, he harvested 120 kilograms, which he sold to ICES and Zoeve Seed Ltd at $65 (Shs 240,000).  “This millet starts flowering after one month,” he says. Its short maturity period makes it easier to avoid dry seasons.

Though initially piloted in Oyam and Apac districts, foxtail millet is steadily gaining prominence among farmers throughout the country. Besides, the millet is nutritious and is being consumed locally.  “I enjoy eating it. It is very good. We also now use it in making malwa – a local brew,” he narrates. “Actually, there are some Chinese who are buying it from us,” he said.

It is also worth noting that the millet is not genetically manipulated and therefore its seeds can be replanted.  It is tolerant to conditions and has higher starch content than the local finger millet.

Foxtail millet was introduced in Uganda as part of Chinese technical assistant and technology under the South to South cooperation – a UN-initiated platform for developing countries to exchange technology, knowledge and resources.

Since 2012, China sent over 30 agricultural experts and technicians to Uganda to provide technical assistance and technology transfer in crop production, aquaculture, horticulture, livestock and agribusiness.

Chinese scientists have since worked with their Ugandan counterparts in various agricultural research institutes and have introduced more than 17 new varieties such as hybrid rice, foxtail millet and maize as well as cabbages.

After lengthy trials at Mukono Zonal Agricultural Research and Development Institute (MUZARDI), Chinese and Ugandan scientists found that foxtail millet could grow well in Uganda and thus rolled it out to farmers. Whereas many scientific agricultural innovations have largely remained in research institutes, foxtail millet has been embraced by farmers.

After successful trial at MUZARDI, Zoeve Seed Ltd – a Chinese company with a farm in Luweero district – has been involved in reproduction of foxtail millet seeds and distributing it to farmers. The new crop varieties have shown quick results. Improved food crops, for instance, have increased crop yields and enhanced farmers’ incomes. Such crops and technology transfer, once well utilized, have the potential to transform Uganda’s agriculture sector and lift farmers out of poverty.

ICES is one of the organizations championing the growing of the millet in Uganda. “We received two kilograms of foxtail millet seeds from Zoeve Seed Ltd and planted it in our farm in Apac district. The harvest was good,” says Bonny Odongo, the projects coordinator at ICES. 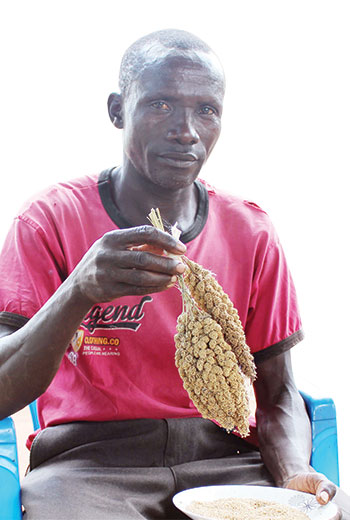 The organization then embarked on mobilizing farmers to plant the rice. Farmers were given free seeds. Last year, ICES distributed 235 kilograms of the millet to 47 farmers in Oyam district, with each farmer receiving five kilograms. Though the timing of the season was not good, Odongo says farmers managed to harvest more than 3.5 tonnes of millet. “We want to make the seeds available to farmers so that they can get serious on its production.”

He explains that the millet has a ready market which the farmers have so far failed to satisfy.

Godfrey Oyuku, the program officer, agronomy and agricology at ICES, explains that in addition to the seeds, Chinese experts from South to South cooperation last year trained farmers in Lango on modern methods of planting foxtail millet. “It is supposed to be planted in rows. When it is overcrowded, you have to thin it and weeding has to be done two times in order to improve on the yield,” he says.

“This millet has ready market, especially from the Chinese. We are struggling to meet the demand. Government of Uganda has approached us to supply them with foxtail millet seeds to pilot it in Karamoja but we cannot meet the market demand,” Odongo says.

Majority of Ugandans are employed in agriculture and thus the sector plays a critical in the country’s transformation agenda. It is the country’s most important export sector, contributing more than half of the total exports. However, the sector faces several hurdles, including lack of access to quality seeds, among others.

Therefore, in the current era of climate change where farmers experience short and unpredictable rains, growing fast-maturing crops such as foxtail millet is the way to go.

Vincent Ssempija, the minister of Agriculture, Animal Industry and Fisheries, says government plans to pilot the millet in Karamoja, an area that has traditionally receive short rains. Already, farmers in other parts of the country are being mobilized to embrace the millet because of its high yields and short maturity period.

“We want to champion this millet up to national level. We want farmers to take it as a serious enterprise that can lift them out of poverty and improve their livelihoods,” Odongo emphasizes.

“Next season, I want to grow this millet on a large scale. With its high yield and ready market, it can get me out of this poverty,” Agony notes. Just like Agony, many farmers in Lango sub-region have placed their hope in foxtail millet to improve their livelihoods and lift them out of poverty.

This article is supported with a reporting grant from the Africa-China Reporting Project based at the Wits University, South Africa