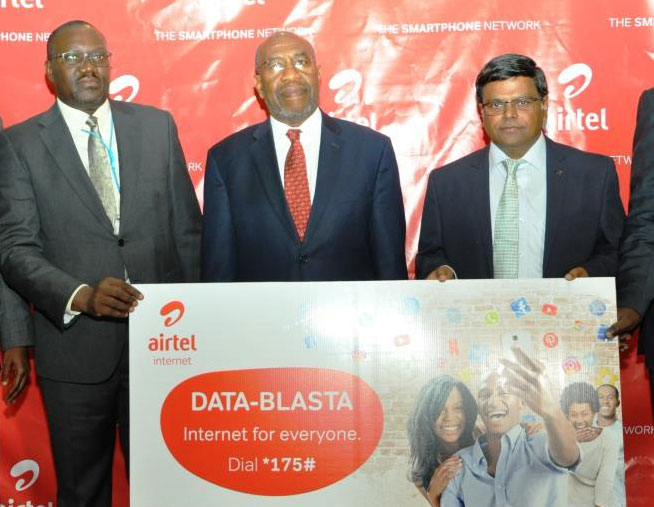 The company yesterday launched a new promotion dubbed data-blasta bundles where clients will get more data and pay less.

The company said its customers will get a drop of data rates to up to 140 per cent depending on the category. This promotion comes at a time when other telecom companies are coming up with similar offers, which is good news for the customers.

Airtel has over 10 million subscribers with at least 30 per cent of them accessing internet.

VG Somasekhar, Airtel’s managing director, said the company’s data-blasta is priced to meet the different needs of their customers whether daily, weekly or monthly.

Under the new arrangement, with Shs 1,000 a customer will get 100MBs. Previously the same amount would get a user 60MBs for 24hrs regime.

Somasekhar added that the company is upgrading their network where 165 sites have been added, meaning in the next six months, Airtel will have the whole country covered with 3G network.

“The network upgrade to countrywide broadband coverage is part of the company’s vision to empower Uganda with connectivity to high-speed internet access which will drive economic growth and social development,” he said.

Somasekhar added: “Airtel Uganda has invested $50m in this financial year 2017/18 with a goal to ensure Uganda is 100 per cent mobile broadband in the next six months. Currently, 154 new sites are being rolled out.

An additional 165 sites are under implementation with an objective to enhance rural capacity and coverage thus providing an unmatched internet experience to our customers”.

Other players like MTN Uganda also expanded their 3G network last year: one of the reasons given then was to increase MTN’s coverage and quality of service. Vodafone and Africell Uganda also provide 4G internet services.