Researchers at the National Agricultural Research Laboratories (NARL) in Kawanda have said they are ready to go for open- field trial of the genetically -modified banana, before it is released to the public in 2021.

This follows the passage of the National Biotechnology and Biosafety Bill, 2012 which now gives them a go-ahead to move out of the station to test their varieties in the community. The law now awaits the presidential assent but the fact that it has been passed by parliament, where it spent more than five years, is a big milestone.

Dr Priver Namanya Bwesigye, a senior researcher and plant biotechnologist at NARL, explained to The Observer: “We have a number of technologies that are almost ready to go. Now that the law has been passed, we’re able to go to the field.” 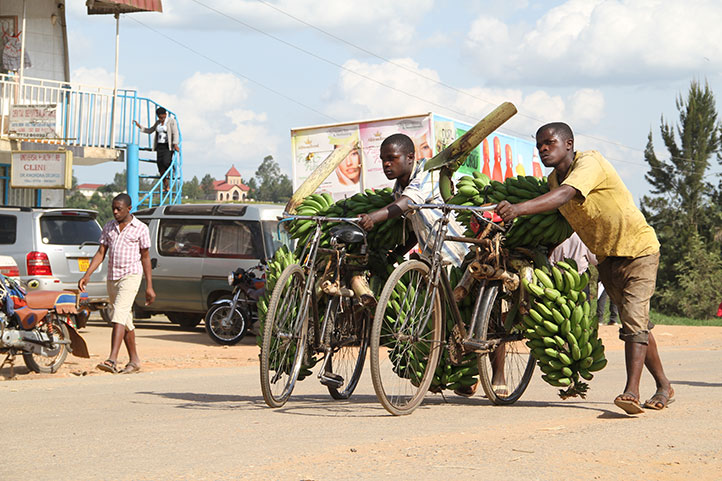 Going for open-field trials, Bwesigye explained, means that they will test the banana varieties with the farmers and the farming communities to make sure they can resist the bacterial wilt in different agro-ecological zones.

“The national variety release committee requires us to test varieties in different zones in the country. It requires us to show that if a variety resists banana bacterial wilt in Masaka, it can also do the same in Gulu.”

For the banana, the researchers need at least two years to evaluate and test in the farming community. This means they will be ready to release GM bananas to the general public in 2021.

The banana bacterial wilt resistant gene was got from green pepper, which is an edible crop while the pro-Vitamin A gene, was got from a banana variety not grown in this region but only found in South Eastern Asia.

These genes are added into the already existing varieties to make them resistant to banana bacterial wilt and become pro-vitamin A.

“The banana remains the same. The only thing that changes is the resistance to diseases,” she said.

Bacterial banana wilt was first reported in Uganda in 2001 – all regions were affected, with central and western regions most hit

It was estimated the country lost up $4bn in ten years from the wilt destruction – this is about 17 per cent of the country’s GDP.

To stem the destruction, a nation-wide campaign was mounted with farmers told to destroy bananas suspected to have the wilt. They were also told not to get suckers from neighbours for planting – this is the most used method to plant bananas in local communities. It is also most susceptible to spread diseases.

Also farmers were told to always cut the male buds so that bees that visit them don’t spread the disease. This requires a lot of vigilance which may not be the case with local farmers.

Dr Bwesigye said that while these measures had reduced banana wilt, they were not sustainable. Research for the GM banana variety started in 2004 and it is a better option to resist banana bacterial wilt.

Various studies have shown that as many as ten million Ugandans are food insecure. Dr Bwesigye said a farmer will still need to manage the technology. For instance, if a farmer does not weed, mulch or prune, it means the yield will still not be enough to ensure his/her food security.

“It is rampant in communities feeding a lot on staples,” Dr Bwesigye said.

The national household survey 2016/17 showed Kigezi region had highest malnutrition cases. This is because of the region’s dependence on Irish and sweet potatoes as the staple.

“We are addressing communities feeding on these bananas every day. The culture has not evolved [in Uganda] to ensure that people change [from staple] to feed on other things like vegetables,” she said.

Dr Bwesigye said these technologies have been designed to be safe. She also said there has not been any GMOs released to the public.

All the trials have been confined at the station. Only banana varieties have been developed at the Kawanda station. Other crops like cassava, coffee, and beans are being developed at Namulonge Agricultural and Animal Production Research Institute.

0 #1 Akot 2017-11-21 02:38
Who will buy Uganda amtoke or any other GMO produce from Uganda when developed countries are going BIO-Natural & have made this priority?

The moment Uganda goes for GMO, all products from Uganda won't have markets any where in developed world!

Even the Nile perch European children love so much won't be on market the moment Uganda go for GMO!

Why are Ugandans so behind world affaires as if they are outsiders & don't need the rest of the world?
Report to administrator
+1 #2 Akot 2017-11-21 16:29
The person who gave Akot red cannot be a Ugandan because, developed world have gone BIO-Natural & there is no turning back!

So, if Uganda insists on GMO-dirty energy, there won't be place for Uganda in the future being built & so fast: the entire world has just concluded conference on Climat & have left no place for GMO-dirty energy... that pollute environment or destroy natural crop reproducation!

No one in Europe buys products without reading notice: origine-way of production-composition...!

When you buy Nile perch in Europe, you know it's either from Kenya-Tanzania-Ugandea side of L.Victoria!

Ugandans seem no to be aware Europeans eat fresh vegetables from the Tropics any time through out the year!

Do Ugandans want to be left out of the world completely & forever?
Report to administrator